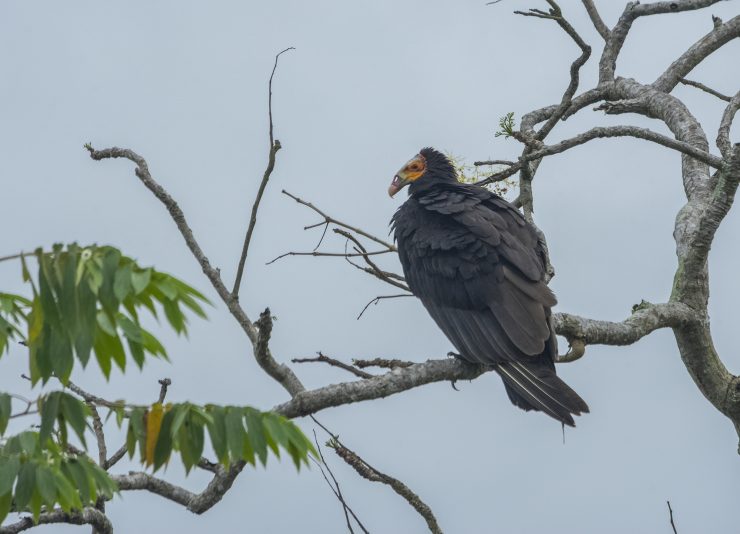 The Amazon guala is a scavenger bird that locates carcasses with sight and smell, a rare ability among birds. It prefers the humid tropical lowland forests and is found in the eastern Andes from southern Meta and southern Vaupés.

It is 74-81cm of lenght. It has a bare head with an intense eye ring, its crown is tinted blue, it has dark black plumage, its wings are two-toned with black inner wing coverts and paler regimes, it has blackish inner primaries which produce a conspicuous dark patch. in contrast to the rest of the regimes.

Similar to the Turkey Vulture (Cathartes aura), but the Amazon guala has a slightly darker broad band that runs vertically down the middle of the wings. It also resembles the Lesser Yellow-headed Vulture (Cathartes burrovianus) but the latter is smaller and less robust, with a thinner and shorter tail. Its plumage is darker brown while C. melambrotus has more glossy black.

Up to 700m. It is found in the eastern Andes from southern Meta and southern Vaupes. It is also found in Guyana, southern Venezuela, eastern Ecuador, eastern Peru, northern Bolivia, and the Brazilian Amazon.

They live in extensive forests where it surpasses or replaces the Common Guala (Cathartes aura), it is seen wandering in the savannas but rarely far from the forest, which provides shelter and nesting possibilities.

The staple of this vulture’s diet is carrion, mainly from mammals such as monkeys, sloths, and possums. It also tends to fish, and can sometimes take live prey. It consumes only fresh meat, and to break the hides of large animals it depends on other stronger vultures such as the king of buzzards (Sarcoramphus papa). It locates the carrion by detecting the smell of ethanethiol gas, produced at the beginning of animal decomposition.

They do not build nests, but lay their eggs directly on cliffs, cave floors, or in hollows in logs. Eggs are cream-colored and spotted with brown, particularly around the larger end. Females lay one to two eggs, although two is the norm. The chicks are altricial and do not produce down until later. They leave the nest after two or three months.

This guala almost always goes up solitary or in pairs and rarely forms groups. Sometimes it rests on high, exposed branches in dead trees that can give it a good view of the terrain. Its way of flying is with the wings in a dihedral position and it keeps very close to the ground, gliding low, venturing very little to higher altitudes. It uses thermal currents to stay in the air with minimal effort without the need to flap its wings. Drink from any body of water available. Urinate or defecate on their feet to dissipate heat by evaporation.

Sometimes considered a superspecies with C. burrovianus, but both are quite sympatric. The taxonomic status of the three species of the genus Cathartes is uncertain. The SACC elevated the Cathartidae family within its own order, Cathartiformes, in its proposal 361 of 2008.

His condition is of minor concern.

It is also usually known as Oripopo Cabeza Amarilla Mayor in Venezuela.