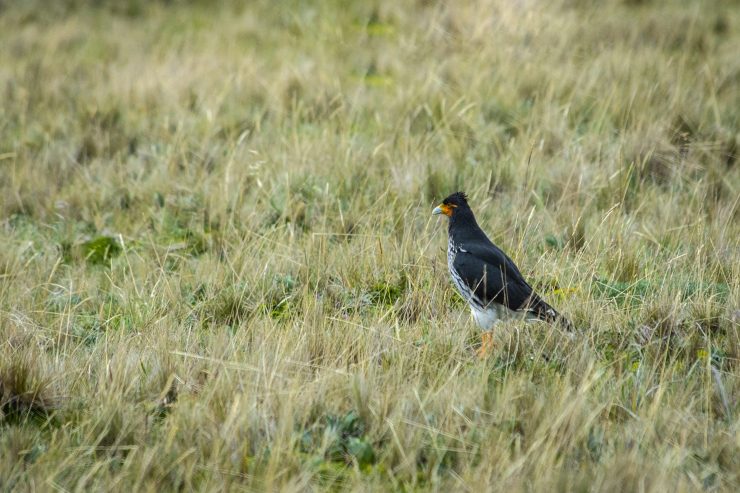 It has a restricted distribution to a small area in southwestern Colombia and Ecuador. Its name Phalcoboenus comes from the late Latin bbalkob = falcon and from the Greek baibo = walking. Its epithet carunculatus comes from the Latin carubcula = small piece of meat.

It measures from 50 to 56 cm and has a wingspan of 110 cm. Both sexes similar. They have hazel to blackish gray irises, yellow bill with blue tones at the base, and yellow legs. His throat and face are bare red to orange skin. It has mainly glossy black upperparts with greenish overtones and the crown feathers forming a small crest. Their remiges and tail are black with white tips, the latter also with a white base and uppers of the same color. It presents the neck, chest, high abdomen and black flanks with white striations; underbelly, inner wing coverts and base of primaries white. Young individuals have a short crest, crown and neck brown with dark spots, brown upperparts with reddish-brown primaries with a buff base and white tip, buff-streaked supracaudal coverts, buff brown underparts and dull brown bill and legs.

It is found in a small region of the Andes of Ecuador and southwestern Colombia. In the country it is distributed from 3000 to 4000 m of height above sea level in the south of the Central mountain range in the departments of Cauca and Nariño.

They are found in páramo savannas and other high open areas with scattered trees.

It feeds on earthworms, larvae, small rodents, birds, lizards, and plant material. It is a widely omnivorous bird and sometimes also consumes carrion.

It lays its eggs from September to October. Chicks have been recorded in January and well-developed young in late May. Nests in ledges and occasionally in pine trees.

It commonly remains in groups of no more than eight individuals, although groups of 100 or more individuals have occasionally been recorded feeding together. They are typically found near livestock. It feeds on the ground where it moves by walking or running.

Formerly considered a subspecies of P. megalopterus. It forms a superspecies with P. megalopterus and P. albogularis, even according to some authors also with P. australis.

At the national and international level, it is classified as a species of least concern. It is currently included in Appendix II of the Convention on International Trade in Endangered Species of Wild Fauna and Flora (CITES).