BUILDING BIRDING TRAILS IN COLOMBIA – BEFORE LOGGERS CAN GET THERE 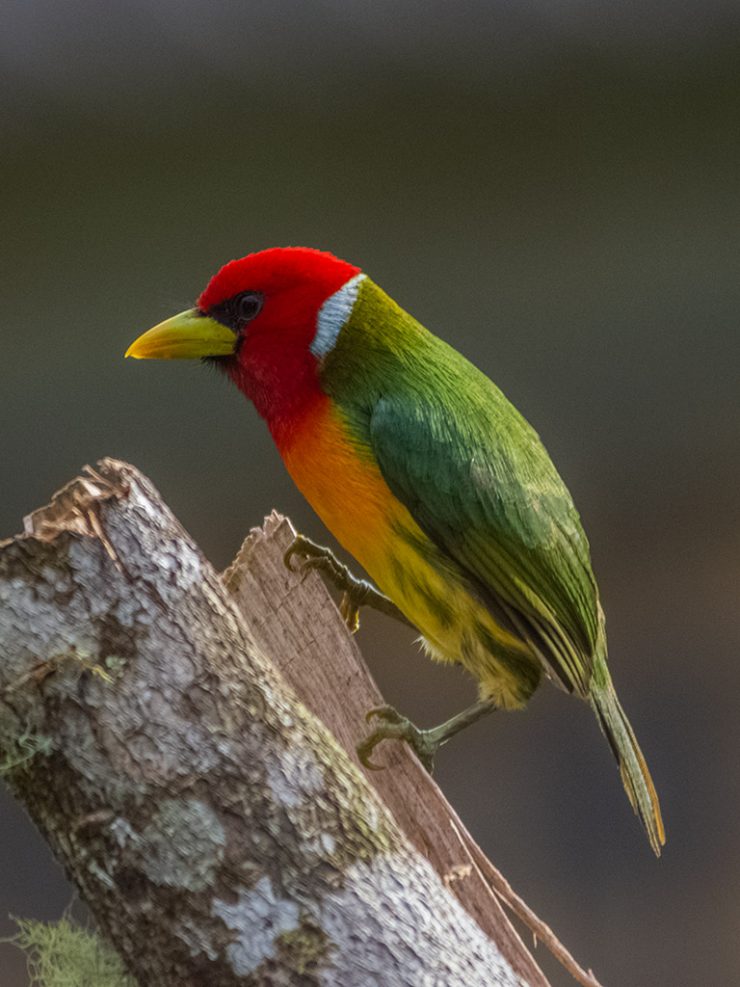 Peace in Colombia is attracting tourists – but also logging. Can a new generation of young birding guides protect its spectacularly species-rich habitats?

As the first rays of sunlight penetrate the forests of Otún Quimbaya Fauna and Flora Sanctuary, Catalina Casas, of Audubon Colombia, leads a group of a dozen guide trainees along a bird-noisy trail. “Is that a Pale-footed Swallow?” Casas asks, pointing to a bird on a sunlit branch. “Or is it a Southern Rough-winged Swallow?” The students’ eyes dart between the bird and the pages of guidebooks. “What colour is the flank?” the questions continue. “Is it blue, or more coffee-coloured?”

The students are among 60 bird guides-in-training who have come to Otún Quimbaya from cities and towns throughout Colombia’s picturesque coffee-growing region in the central Andes.  And there’s no shortage of facts to learn about Colombia’s birds. The country has more than any other country, with in excess of 1,950 confirmed species.

Throughout Latin America and the Caribbean, the National Audubon Society (BirdLife in the US) is working with local partners to develop birding ecotourism. Audubon’s Colombia office is collaborating with Asociación Calidris (BirdLife in Colombia) to support conservation and local livelihoods by developing a national network of birding trails. Each ‘trail’ consists of Audubon-trained professional birding guides, sites such as national parks and private reserves, and small businesses and support services.

The need to develop sustainable sources of income in Colombia has taken on a new urgency since the government’s 2016 peace accord with the guerrilla movement known as the Revolutionary Armed Forces of Colombia, or FARC. If peace has made the country more attractive to international visitors, it has also complicated the chances of survival for some of Colombia’s rarest birds. A half-century of violence uprooted millions of rural Colombians and converted large swathes of the country’s interior into no-go zones. Now, the end of fighting has set off a race to recolonise and exploit rural districts, including protected areas.

“The rebels were de facto rangers, and now there’s no one to fill that role,” says 26-yearold Kristian Daza, who began working at Otún Quimbaya’s lodge at the age of 21. “In many of the places they’ve left there’s little control. People are coming in to log and mine, and to burn the forest to create ranches and farms.”

Satellite monitoring confirms Daza’s observations: in 2017 Colombia lost more than 1.04 million acres of tree cover, according to the World Resources Institute – a 46% rise in deforestation from 2016. Some of the most significant degradation is occurring in the country’s most ecologically important – and in some cases, still unexplored – areas.

A few minutes before the guides head toward Otún Quimbaya’s dining room for breakfast, Hernán Arias, leading another group of students, spots a Cauca Guan Penelope perspicax. The species is now locally extinct in its namesake region Cauca, and fewer than 1,000 individuals are thought to exist in the wild. But in Otún Quimbaya at least, its habitat is well-protected. “We are getting more birders, who are contributing resources that allow us to protect the forest and its species,” says the reserve’s director, Gloria Teresita Serna.

Just a few years ago, only the most hardcore birders would have ventured into this forest. “The high valley of Otún was under the influence of armed groups,” says Serna. “As a consequence we have some places far up in the valley that have never been visited. Who knows what kinds of species we might find up there?” Indeed, Colombia’s bird list continues to grow, and some species that were described in 1980s guidebooks as ‘near mythical’ or presumed extinct – such as Yellow-eared Parrot Ognorhynchus icterotis (Endangered) and Indigo-winged Parrot Hapalopsittaca fuertesi (Critically Endangered) – are now a regular part of birders’ itineraries.

Guide Arnulfo Sanchez has been at the forefront of determining the status of birds in el Sutú. Among the region’s avian standouts are little-known members of the tanager genus Bangsia, named for the 19th-century ornithologist Outram Bangs.

“During the conflict there was only one hotel in [my hometown] Mistrató, and it was always empty,” says Sanchez. “When peace finally came, word began to spread that the place I live is a birders’ paradise. Soon people were asking if I could help them see a Gold-ringed Tanager, or other birds that are hard to find elsewhere.”

Over the past six years the inventory of birds around Mistrató has risen from 237 to 445, including at least 28 tanagers. The town now has four hotels, and several residents who work in tourism. But for Sanchez, the value of bird guiding is that it allows him to discover birds and improve his family’s farm.

“I’ve planted 55 species of trees, which help to shade the coffee and attract birds. Now our neighbours are getting involved in conservation. Once they see what we are doing and understand what they have, they will protect it.”

Colombia’s Ministry of Commerce, Industry and Tourism has declared the ambitious goal of becoming the world’s number-one birding destination. The number of foreign visitors is growing at nearly 40% per year, and birders have taken notice – as have tour operators like Rockjumper Birding Tours, which offers birders the chance to see a whopping 1,000 species of bird in 30 days.

But the challenges are formidable. Even though Colombia has more than doubled its national conserved area since 2010 — from 13 million hectares to 28.4 million hectares — many reserves remain unprotected. A new government, under intense pressure to boost economic development, may be more welcoming to extractive industries.

Many, if not most, of Colombia’s new birding hotspots currently lack basic tourist infrastructure and trained guides. Though the government requires that tourist guides be certified through a two-year program, it lacks the capacity to train and certify enough guides to meet demand. To stay within regulations, most graduates of the Audubon program will need to present themselves as ‘interpreters’ or ‘informants’.

Whatever they are called, the graduates of this innovative program will be among Colombia’s biggest assets as the country rebuilds itself into a thriving — and hopefully sustainable — 21st-century economy.  Birding in Colombia is new and hip, and birders tend to be younger than those in North America and Europe. That represents a source of optimism for older trainees, such as Javier Salazar, 48.

“Not long ago, it would have been risky to stand in this forest as we are, watching a Red-ruffed Fruitcrow tend to its chicks,” says Salazar. “Now the danger isn’t armed conflict, but the race to exploit our natural resources. But this experience makes me optimistic. I love watching these young people as they grow and learn. Their passion and their knowledge will help this country to recuperate.”