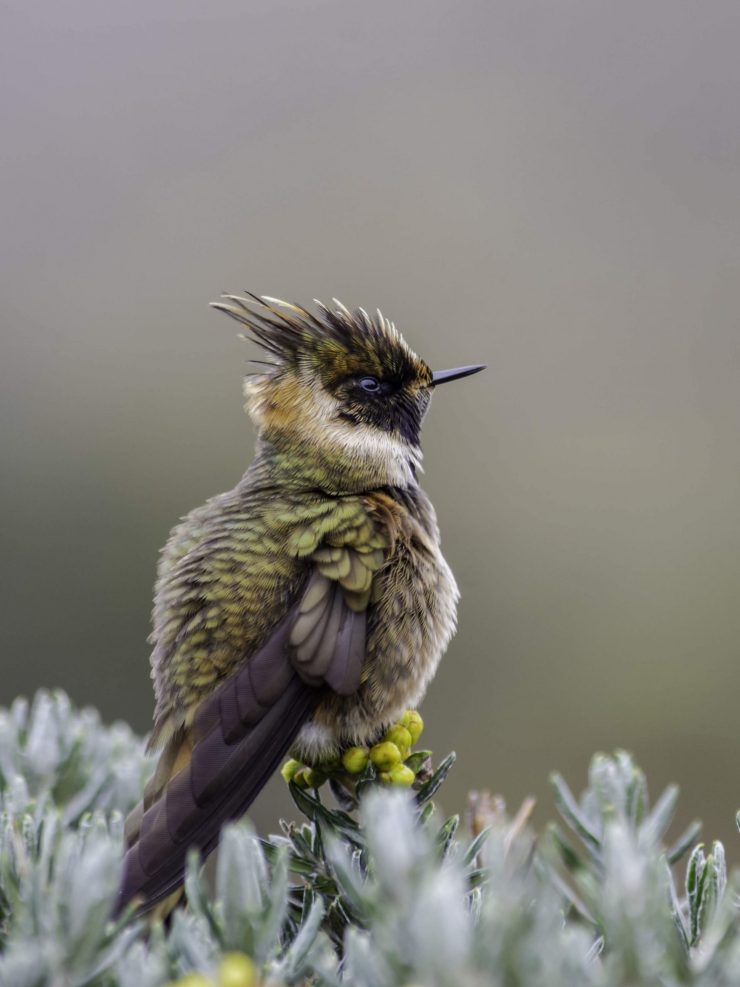 The size of the bird is 11.2 to 12.7 cm. The female is similar to the male, but does not have a crest or «beard», it has a short, straight black beak, the head is black to dark brown, and the back is bronze. It has a white collar from the crown, passing behind the eyes and throat ending in the chest; the underparts are purple-brown to brownish tones, the belly is more cinnamon. The tail is forked, copper to bronze green, with a white stripe on the outer rectrices, underneath it is rufous. The juvenile is similar to the female.

Very similar to Oxypogon cyanolaemus, which is found in the Sierra Nevada de Santa Marta and is distinguished by its bright purple-blue beard, sides of the crown with a greenish luster, and underparts mottled with whitish brown. Also similar to Oxypogon guerinii, but it features long, sharp black and white crest and bright purple crown sides. He has a shaggy white beard with an iridescent green central stripe.

It is an endemic species, it is found in Colombia in the Central Cordillera, in the Nevados National Natural Park, between Tolima and Caldas.

It is located between 3,000 and 5,200 m of altitude. Its preferred habitat is the páramo, with an abundance of frailejones (Espeletia hartwegiana).

It feeds on nectar and insect larvae mainly on Espeletia schultzii flowers; it perches on flowers using its tail for support (like a woodpecker), also perches on the ground to catch arthropods, or uses perches to hunt insects in flight.

It is listed as a species of least concern, as there are no threats to the species. Its population is decreasing.

The very restricted distribution of the species (less than 400 km²) increases its vulnerability; It is protected in the Los Nevados National Park, but potato crops in the sub-páramo are a great threat, as is the burning of páramo for the generation of pastures for livestock.

The song consists of a single high note and repeats «tsee» every 3 to 5 seconds.