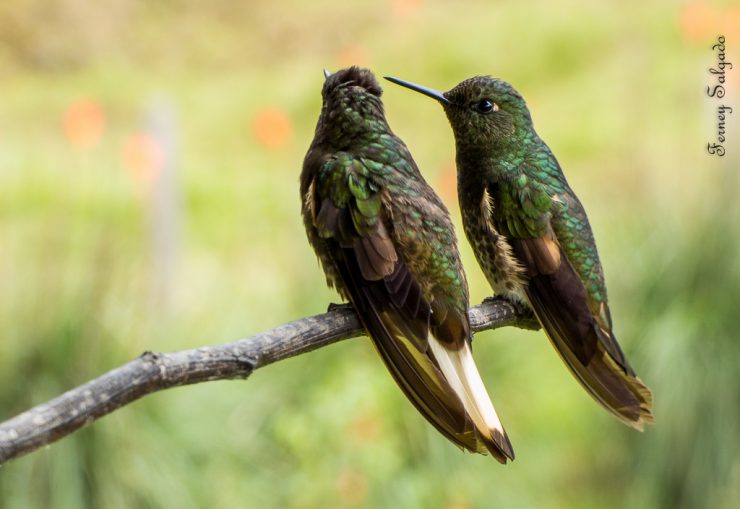 The approximate size of these bird is 10 cm.

The Buff- tailed Coronet is a bird which belongs to the family of Trochilidae and the order of Apodiformes.

It has a black and straight bill. The male is bright green on top, as well as on his throat and chest. The belly, flanks and sides of their rump exhibit underground bars before and their thighs are white.

its inner wing covers are cinnamon-coloured and have bronze-coloured central rectrices and the rest of the cream tail feathers with bronze apex. Generally, the female presents the external feathers of the rectrices of color before but with the bronze of the tips reduced or absent.

It is distinguished from other hummingbirds by cinnamon-coloured internal wing coverings.

This species is found in the Andes from the northwest of Venezuela to the south through Colombia to the north of Ecuador. In Colombia it is distributed from 1400 to 2800 m above sea level in the three mountain ranges.

It eats nectar and insects, like other hummingbirds, but it also settles with pleasure, whether to consume the nectar or to capture insects placed on the branches and trunks, a less usual behavior of the Trochilidae.

Hummingbirds of the genus 𝘉𝘰𝘪𝘴𝘴𝘰𝘯𝘯𝘦𝘢𝘶𝘢 are accustomed to stretching their wings an instant after perching.