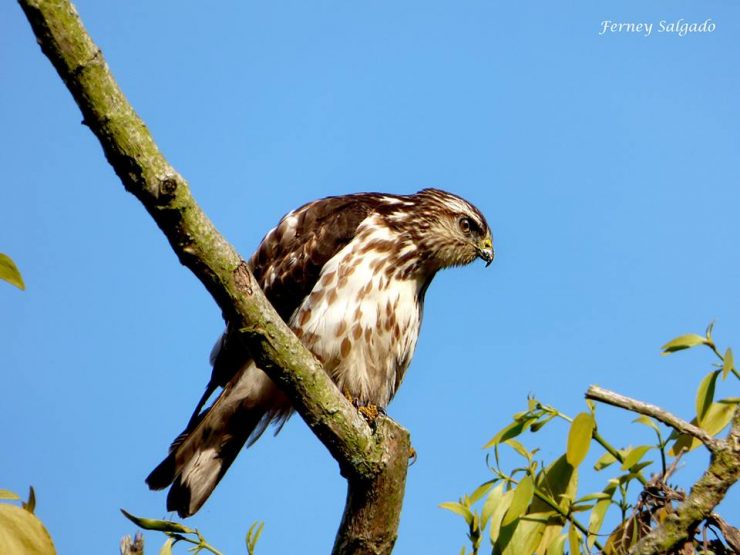 The broad-winged hawk (Buteo platypterus) is a small hawk of the genus Buteo. During the summer, some subspecies are distributed over eastern North America, as far west as British Columbia and Texas; they then migrate south to winter in the neotropics from Mexico down to southern Brazil. Other subspecies are all-year residents on Caribbean islands. As in most raptors, females are slightly larger than males. Broad-winged hawks’ wings are relatively short and broad with a tapered, somewhat pointed appearance. There are two types of colouration: a dark morph with fewer white areas and a light morph that is more pale overall. Although the broad-winged hawk’s numbers are relatively stable, populations are declining in some parts of its breeding range because of forest fragmentation.

The broad-winged hawk is a relatively small Buteo, with a body size from 32 to 44 cm (13 to 17 in) in length and weighing anywhere from 265 to 560 g (9.3 to 19.8 oz). The tail is relatively short, measuring 14.5–19 cm (5.7–7.5 in) in length. The tarsus measures from 5.6 to 6.6 cm (2.2 to 2.6 in). As in most raptors, females are slightly larger than males. Broad-winged hawks have relatively short and broad wings, pointed at the end, which have a tapered appearance unique to the species. The wingspan can range from 74 to 100 cm (29 to 39 in), with the extended wing bone (standard measurement) measuring 22.7–30 cm (8.9–11.8 in). Adults’ bodies are a dark brown with a white belly and chest containing horizontal barring. Their tail can be a dark grey-black with white lines along the middle, base and tip. The young hawks have a slightly different colouring with more white and longitudinal barring instead of horizontal barring. There are two types of colouration: a dark morph with fewer white areas and a light morph that is more pale overall. The light morph of this bird is most likely to be confused with the red-shouldered hawk, but they have a longer, more heavily barred tail and wings with a solid rufous colour in the adult which are usually distinctive. Rare dark morphs are a darker brown on both upperparts and underparts. Dark-morph short-tailed hawks are similar but are whitish under the tail with a single subterminal band.

It can be confused with the Roadside Hawk (Rupornis magnirostris), although it is much grayer and rufous wing patches can be seen in flight. In its immature state it can also be confused with other immature Buteo, specifically the Grey-lined Hawk (Buteo nitidus), but the latter is cream-colored on the belly and with scattered stippling, not striated as in B. platypterus.

This species, Buteo platypterus, is in the family Accipitridae, which is placed in the order Falconiformes (or Accipitriformes). Currently the species is split up into six subspecies; each is named for its distribution,[citation needed] as listed below:

B. p. platypterus – (Vieillot, 1823): Northern broad-winged hawk that occurs throughout much of continental eastern North America.

B. p. antillarum – Clark, AH, 1905: Antillean broad-winged hawk that occurs in the Lesser Antilles from Saint Vincent and Grenada to Tobago, excluding Antigua.

Broad-winged hawks have a wide range in North America and South America, from southern Canada to southern Brazil. Their breeding range is in the northern and eastern parts of North America and some, not all, migrate in the winter to Florida, southern Mexico and northern South America. There are five subspecies that are endemic to the Caribbean that do not migrate. Thus, broad-winged hawks are partial migrants. Those subspecies that do migrate will fly in flocks of more than forty up to hundreds of thousands at heights anywhere from 550 m (1,800 ft) to approximately 1,300 m (4,300 ft). They soar using thermals to carry them through their journey of 3,000–6,000 km (1,900–3,700 mi).[11] Fall migration lasts for 70 days as birds migrate about 100 km (62 mi) per day from North America, through Central America to South America without crossing salt water.[12] The enormous flocks of soaring broad-winged hawks are termed kettles and are characteristic of many hawk migration spectacles in North America, such as at Hawk Cliff in Ontario, Hawk Ridge in Minnesota, Hawk Mountain in Pennsylvania, and the River of Raptors in Veracruz.

Broad-winged hawks stay in areas up to an elevation of about 2,000 m (6,600 ft). They breed in deciduous forests good for nesting and forage primarily in wetlands and meadows. While some birds have acclimatized themselves to living near humans even those birds avoid human settlements and interactions. In the winter the migrating subspecies of the hawks seek out similar conditions to their overwintering home, so they settle in deciduous and mixed forests.

Broad-winged hawks are carnivores. The types of food they eat depends on the time of year. During the summer or nesting season the parents and ultimately their chicks will eat small mammals, such as chipmunks, shrews, and voles, frogs, lizards, and sometimes even other nesting birds. In the winter months broad-winged hawks have been observed feeding on insects, frogs, snakes, crabs, and some small mammals. To catch their prey, broad-winged hawks will watch from low branches hiding in the foliage until a target is spotted. From their roost they will do a short fast glide to capture the prey. They give special attention to preparing their food for consumption, skinning frogs and snakes and plucking prey birds’ feathers. Most small mammals on the other hand will be eaten whole. They rarely drink water and are able to survive solely with the water present in their prey.

These birds will have only one mate during the breeding season, possibly because the male also helps a small amount with the rearing of the chicks. They will breed between April and August starting when they reach sexual maturity at about two years old.

To attract and court females, the males will perform a courtship display flight including cartwheels, dives, and other aerial acrobatics. Birds meet in the air, hook their feet together and spiral down together. They will also compete and fight with other males for the chance to mate with a female. If one of the males is successful, the mating pair will have only one brood that season consisting of one to four eggs.

Both the male and female will build the nest out of sticks and twigs in a deciduous tree. Once laid, the brown-spotted eggs are usually 49 mm × 39 mm (1.9 in × 1.5 in) and weigh about 42 g (1.5 oz). The female will then develop a brood patch and incubate the eggs for 28 days or longer before they hatch.

The hatchlings will appear semi-altricial; incapable of any complex coordination but have open eyes and are covered in down feathers. Chicks will have rapid body growth until they are almost at adult body size at which time they are capable of walking, flying and eating without parental help. While in the nest the female gives most of the parental care, protecting and taking care of the chicks. It is not unusual to have the male provide some food for the female and offspring but his visits are short lived.

Once a prey item is obtained for the nest, the female will tear off pieces and will feed the chicks until they are able to rip meat off on their own. Often the chicks will fight for possession of the offered morsel, the younger ones usually losing and not getting enough.

Broad-winged hawks will protect their nests in a show of aggression (i.e. diving and chasing) towards any suspected threat but they generally will not make physical contact. Predators of eggs and nestlings include raccoons, crows, porcupines and American black bears. Adults have been known to fall to red-tailed hawks, great horned owls, bald eagles, and golden eagles. It will take the hatchlings five to six weeks before they are able to leave the nest. Some young, even after that time, will remain in the area of the nest for several weeks more.

Although the broad-winged hawk’s numbers are relatively stable, populations are declining in some parts of its breeding range because of forest fragmentation. Since there are no threats to its survival, it is assessed as Least Concern on the IUCN Red List.

These hawks use vocalizations for communication with their mates and offspring. Also in territorial displays towards intruders like red-tailed hawks or other threatening animals. The call sounds like a very high pitched kee-ee, almost like a whistle. When confronted with a threat broad-winged hawks will emit an alarm call consisting of stuttered and squealing whistles.