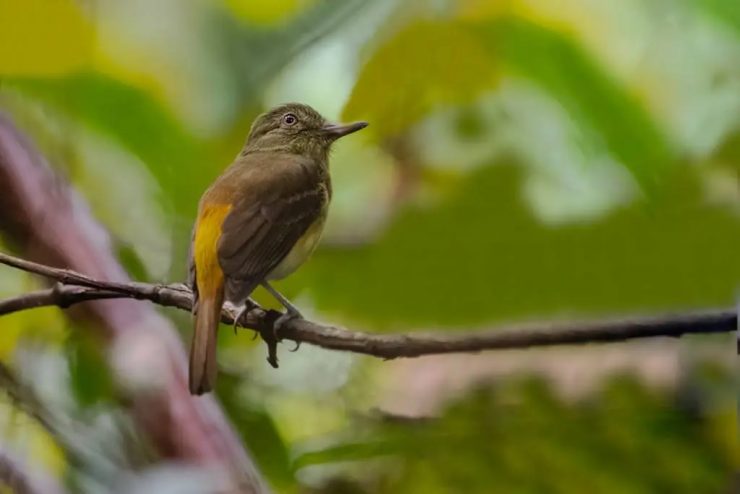 The bright-rumped attila is a large tyrant flycatcher with a big head, hooked and slightly upturned bill and upright stance. It is 7 in (18 cm) long and weighs 1.4 oz (40 g). The head is olive-green streaked with black, the back is chestnut or olive, the rump bright yellow and the tail brown. The wings are dark brown with two pale wing bars and paler feather edging. The whitish or yellow throat and yellow breast are variably streaked darker. The belly is white becoming yellow near the tail. The iris is red. The sexes are similar, but young birds have a cinnamon-fringed crown and brown eyes.

The plumage is very variable, but the streaking below and obvious wingbars help in distinguishing this species from others in the genus. The calls include a loud beat-it, beat-it and a plaintive ooo weery weery weery weery woo. It does not move when singing, so can be difficult to see.

Few tyrant-flycatchers pose the taxonomic problems that the Bright-rumped Attila does. Twelve subspecies are generally recognized across this species’ extremely broad range, which stretches from northwest Mexico to northwest South America, then over much of the lowland northern two-thirds of the continent, with a highly disjunct population in the Atlantic Forest of eastern Brazil. In addition to reasonably substantial plumage variation, ranging from birds with an olive-green head, breast, and mantle, to those with largely rufous upperparts, the species is also polymorphic, with gray and rufous morphs described. Finally, there are reasonably marked differences in dawn songs between Middle and South American populations, all of which prompt a wide-ranging and very detailed investigation into the species’ taxonomy. Overall, the Bright-rumped Attila is uncommon to fairly common, and inhabits a reasonably wide range of forest types, although it generally avoids heavily disturbed areas.

It is distinguished from the cinnamon Attila (Attila cinnamomeus) by its contrasting rump, it has wing bars and the chest is almost always darker and in contrast to the abdomen (they are less evident in a very tan individual). The White-eyed Attila (Attila bolivianus) is larger and more robust and has a gray crown in contrast to its back.

In Colombia it reaches 2100m above sea level (usually less than 1500), on the Pacific Coast and north of the Andes to the Sierra Nevada de Santa Marta and south in the Magdalena Valley to Puerto Berrío. Also in eastern Antioquia, east of the Andes on solid ground. Its distribution extends from Mexico to western Ecuador, northern Bolivia, and southeastern Brazil and Trinidad.

The bright-rumped attila is a common bird from the lowlands to 7,000 ft (2,100 m) ASL. It occurs in forests, second growth, pasture and plantations with trees, and shady gardens, and apparently it can tolerate a considerable amount of habitat destruction. It is an active, aggressive and noisy species, usually seen alone. It eats insects, spiders, frogs and lizards taken from vegetation or the ground. It will pursue prey on foot as well as attacking in short sallies, and will follow army ant columns. It also takes many fruits (such as from gumbo-limbo Bursera simaruba, and less frequently from Cymbopetalum mayanum) and seeds.

It breeds from March to July and forms well-established pairs. Build a bulky, open nest set low in a fork, mossy rock, or a cavity in a tree. It uses different vegetable fibers for its construction. The female lays 3-4 pale buff-colored eggs with thick reddish-brown markings, especially on the larger end.

The nest is a deep cup of mosses, leaves and plant fibre; it may be built usually below 3m high amongst epiphyte, between buttress roots or in a bank, not necessarily in the forest. The typical clutch is two lilac- or rufous-marked dull white or pink eggs. Incubation by the female is 14–15 days to hatching, with another 17 days to fledging.

Catch insects, spiders, small frogs and lizards in the vegetation or on the fly. It is usually observed capturing its prey as they crawl on the ground. It also feeds on berries and arylated seeds and is sometimes associated with legionary ants (Eciton spp.) To catch fleeing prey.

It sings persistently, often from a perch high in the foliage where it is difficult to locate. Its call is a double whistle and at the end it produces a sonorous note. They have a particular vocalization at dawn. Remains solitary, slow and sometimes seen with mixed flocks. Forages at all heights (predominantly mid-level) using short flights and hovering to take fruit and capture insects in the foliage.

Their characteristic song given at dawn has been analyzed in detail: it has a very variable number of weerys which may become weery’os, and often ends in a woo-whit; a finite state machine has been developed to simulate this structure. However, due to the highly variable songs more data is required before the technically plausible split can be accepted; the AOU has so far refrained from formally acknowledging it.

Farieta, A. 2011. Dictionary of the scientific names of the birds of Colombia, Origin and use. El Bosque University.