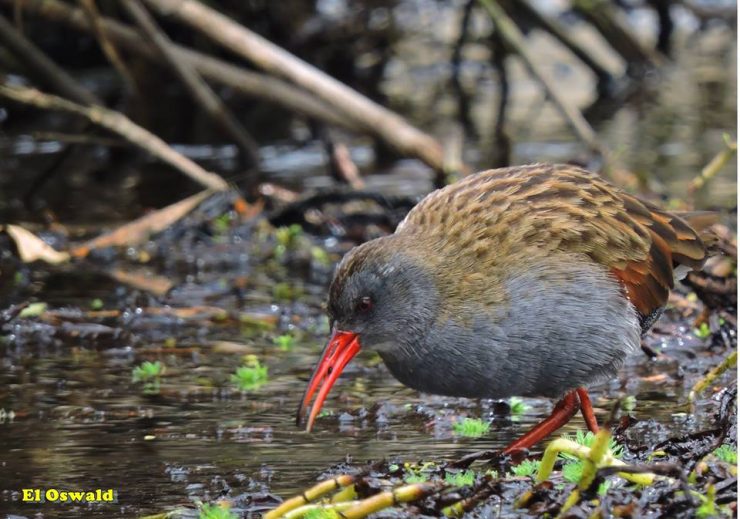 This is an ENDEMIC species from the Andes of Colombia from Boyacá to the Sabana de Bogotá. It is currently in a Threat state and its main threat is habitat loss. Its name Rallus is the Latinized form of the French term rale = rálido and its epithet semiplumbeus means half gray and derives from the Latin roots semi = half and plumbeus = leaden gray.

It measures 25 to 30 cm. Both sexes are similar. It has a dull red bill and legs. The sides of the head are leaden gray and the top is dull olive brown streaked with black with the shoulders dull rufous brown. Their underparts are also leaden gray with a whitish center of the throat and their black flanks thickly barred with white. Juveniles are similar to adults but with sooty tips of chest feathers and whitish throat.

In its range it is easily distinguished from other rails by its red legs and bill.

21 subspecies are recognized, of which only two are found in Colombia: R. l. cypereti and R. l. phelpsi, the first in the south-west of the country and the second in the extreme north-west.

This is an endemic species to Colombia and is found in a few locations in the Eastern mountain range between 2,100 and 4,000 meters above the sea level. It has been registered in the Tota lagoon in the Boyacá department,  and in the Fúquene, Cucunubá, Pedropalo, Juan Amarillo lagoons, in the towns of Subachoque, Torca, Cota, Bogotá and its surroundings, Páramo de Chingaza and the Chizacá lagoon in Cundinamarca department.

This species inhabits freshwater savannas and swamps where there is good coverage of reed beds of the genera Scirpus, Typha and Cortaderia. In a large part of the areas where the swamps live, they are covered by aquatic vegetation composed of Azolla sp., Ludwigia peploides and Limnobium stoloniferum. It can also be found in swamps covered by the Chusque Swallenochloa sp. in the moorland, In regenerating burned areas, channels covered by Juncus sp. and constructed wetlands. This species apparently requires heterogeneous habitats with low floating vegetation areas interspersed with higher vegetation areas such as reed beds.

Its reproduction period apparently covers the months between July and September and can have second clutches between November and December. Apparently it is a monogamous and territorial bird. Nests on agglomerations of Typha sp. and Scirphus sp. where it builds an oval platform at a low height (13 to 35 cm). Their lay size can be up to 4 light brown eggs with pale blue spots.

It is a fairly active bird from dawn to dusk. Feeds on the edges of swamps, in wet grasses, muddy areas, and in patches of floating or dead vegetation. It is a fairly elusive but less sneaky bird than other species of the genus and is generally only seen in open areas early in the morning.

Forms a superspecies with Waders Rallus and R. antarticus. The subspecies peruvianus is known only from the Type specimen which could merit species status.

It is currently considered an nationally and internationally endangered species due to its occupation area​​ is restricted, fragmented and also is in process of reduction. The main pressures it faces are the loss and destruction of its habitat and a large part of the wetlands in which it inhabits are subject to chemical contamination due to the dumping of residues by tanning industries and contaminated waters with pesticides applied to flower crops. Indiscriminate hunting, the use of land for cattle grazing and the establishment of limestone quarries are other causes of the degradation of the habitat of this species. In its entire distribution area, it is only protected in the Chingaza National Natural Park.