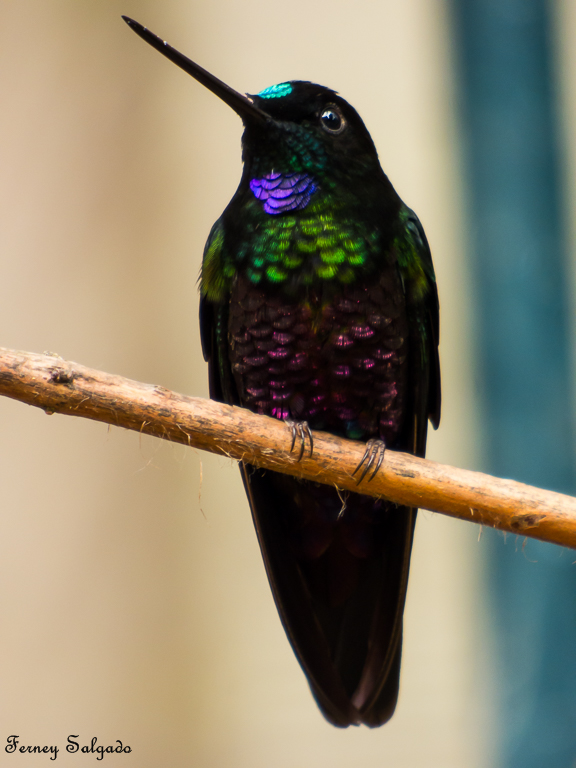 It is a hummingbird of average size. Long and slender bill. Its tones vary between black and greenish black, passing through green and aquamarines. Its beautiful colors are appreciated in good daylight. Inhabitant of humid forests and gardens.

The male looks spectacular when viewed in very good light, but the colors are usually difficult to see in the field. It has a blue-green rump and a pink belly (both sexes) are diagnostic. The Inca Dorado has an orange and purple rump and belly. The Black Inca has white pectoral locks.

In Colombia we find the subspecies helianthea.

It is found in the northern and eastern Andes of Colombia and northwestern Venezuela. In Colombia it is found from 1900 to 3300 m above sea level (mainly from 2400 to 2900m) in the Serranía de Perijá and also on both slopes of the Eastern mountain range from the north of Santander to Cundinamarca (Bogotá area).

This species is fairly common and local in the humid forest, adjacent to edges and on slopes with bushes or around hedges and gardens. It is seen near rooms. It is often found in the garden of Simón Bolívar’s house (which is open to the public) in Bogotá. It also tolerates more open terrain than other Coeligena from Colombia.

It feeds on various species of ericaceae, also on epiphytes such as Cavendishia, also on Symbolanthus, nasturtiums such as Tropaeolum, and some passion flowers.

1 male was found in reproductive condition, in May, in the Serranía de Perijá; and 1 in August, in Santander.

As in others of the genus, it is a low-flowered rutero, often attracted to mixed bands.

At the international level, this species is considered to be of least concern.

It is also known as the Violet-bellied Hummingbird.