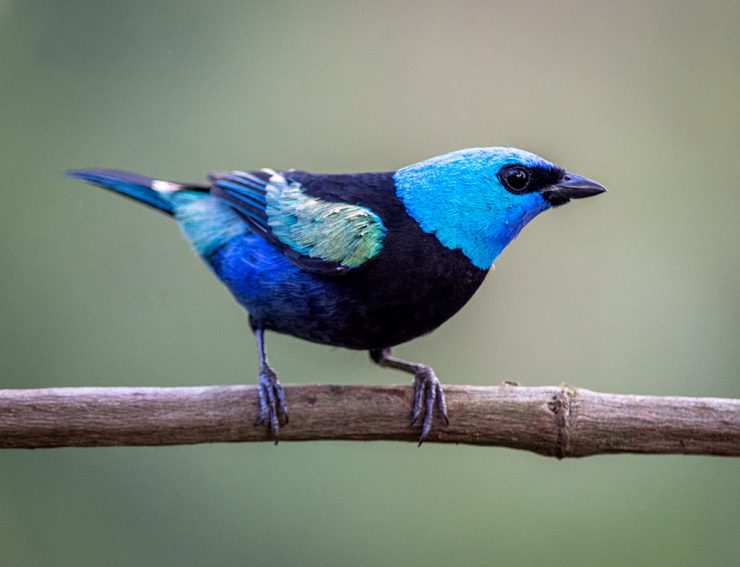 The blue-necked tanager (Stilpnia cyanicollis) is a species of bird in the family Thraupidae. It is found in Bolivia, Brazil, Colombia, Ecuador, Peru, and Venezuela.

It can be confused with the Masked Tanager (Tangara nigrocincta) in the eastern Andes but it has a paler head, greenish cheeks and white instead of black on the abdomen. Very similar to the Blue Dacnis (Dacnis cayana) but it has a blue back and a black throat.

The blue-necked tanager averages 12 cm in length and weighs approximately 17 g. They have a blue hood and throat. The wing coverts, wing edges, and rump are turquoise to a greenish straw color. The posterior underparts are black, violet, or blue. The juveniles are brownish gray, with a hint of adult coloration. Coloration of adults varies slightly by region. The beaks, legs, and feet are black.

This species of bird is found in Brazil, Colombia, Ecuador, Peru and Venezuela.

It’s commonfound in montane forests of the east slope of the Andes at elevations ranging between 800-2200 m. It also occurs in Co, Ec, Br, and Bo.

The diet of the blue-necked tanager consists of fruits, berries, flower blossoms and insects. Tanagers will pick insects from leaves, or sometimes in flight, but fruit is the major dietary item.

The female builds a cup nest of moss, usually well concealed, and lays an average of 2 white eggs with brown spotting. Incubation is 13–14 days and the chicks fledge after 15–16 days. The male and female feed the nestlings on insects and fruit, and may be assisted by helpers.

Reproduction evidence has been recorded between January and August. They lay 2 white eggs with brown dots in a cup-shaped nest, which they build out of moss. They nest at moderate heights in forest clearings.

Solitary, in pairs or in family groups, it forages at variable heights and is sometimes seen flying awkwardly trying to catch insects on the fly. Very seldom hangs upside down along branches or seen in mixed flocks with other tanagers.

It is considered a species of least concern.