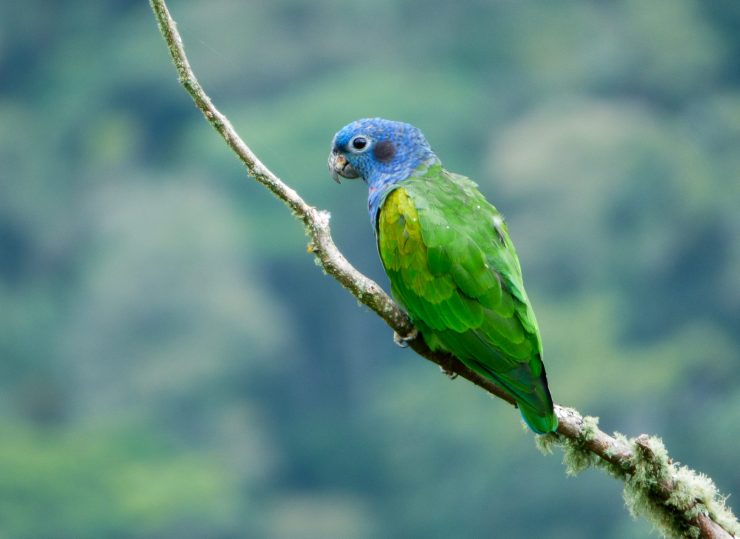 The blue-headed parrot is about 28 cm (11 in) long and weighs 245 g. It is mainly green with a blue head, neck and upper breast, red undertail coverts, and some yellowish on the wing coverts. The upper mandible is black with reddish areas on both sides. They have dark ear patches.

In addition to the well-known nominate subspecies found throughout most of the species’ South American range, there are two more localized subspecies: rubrigularis from southern Central America and the Chocó has an overall paler plumage and typically a relatively distinct pinkish patch on the throat, and reichenowi from the Atlantic Forest in east Brazil has a paler bill and most of the underparts blue. In all subspecies the male and the female are alike, and juvenile birds have less blue on the head, as well as red or pinkish feathers around the ceres. They moult into their adult plumage at about 8 months of age, but it can take up to two years for the full blue hood to emerge.

It is usually confused with the Red-billed Parrot (Pionus sordidus) in the Serranía del Perijá and the Sierra Nevada de Santa Marta, but it has a red bill and a bluish-brown head. On the Pacific side, it resembles the Rubicunda Parrot (Pionopsitta pulchra) but it has a pink face.

In South America, the blue-headed parrot is mainly an Amazonian species, including in the southeast the neighboring Araguaia-Tocantins River system as its eastern limit; a disjunct population lives southeastwards on Brazil’s South Atlantic coast, a coastal strip from Pernambuco in the north to Espíritu Santo state in the south, about 1500 km long. In northwest South America the range continues into Central American Panama to Costa Rica. It avoids the northern Andes cordillera spine, and a smaller contiguous area of central Venezuela and northern Colombia. A Pacific Ocean coastal strip continues the range, from southern Ecuador, north to Caribbean areas of northwestern Colombia and western Venezuela.

Its habitat is forest and semi-open country, including cultivated areas. It is largely restricted to humid or semi-humid regions, but locally extends into drier habitats, at least along rivers. The blue-headed parrot lays three to five white eggs in a tree cavity.

They eat fruit and seeds, and sometimes grain. They roost communally in palm and other trees, and large numbers can be seen at the roost sites at dawn and dusk.

Reproductive events have been recorded between January and May in Panama and between February and April in Colombia, Ecuador and Venezuela. They nest in hollows of palms, trunks and dead branches where they lay 4 eggs which only the female incubates. In captivity, incubation takes between 24 and 29 days and the complete development of the chicks takes between 55 and 60 days.

The blue-headed parrot nests in tree cavities. The eggs are white and there are usually three to five in a clutch. The female incubates the eggs for about 26 days and the chicks leave the nest about 70 days after hatching.

During the flight, he makes a high-pitched, shrill call. It is common to see them in pairs and flocks of 100 or more individuals. They normally rest in tree canopies, sometimes exposed on young palm leaves or bare branches.