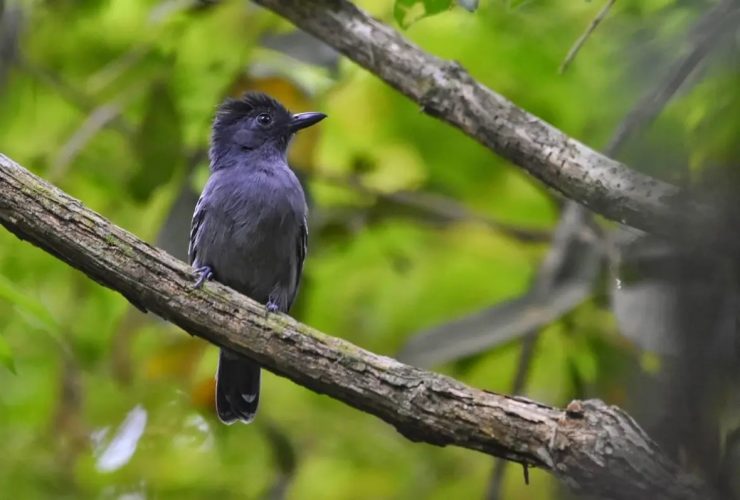 This batara has a strong hooked beak with which it catches various insects and spiders. It is generally seen in pairs following mixed flocks. Thamnophilus derives from the Greek thamnos = bush and philos = lover of, referring to their habit of moving at low heights among the bushes. Its epithet nigrocinereus refers to its coloration and derives from the Latin niger = black and cinereus = ash color.

It is 16 cm in lenght and weighs 28 to 32 g. It has a strong hooked beak. Male is blackish gray, slightly blacker on head, throat and back and paler on rump and chest. It has a hidden white interscapular patch, scapulars, wing coverts, and white-edged flight feathers. The tail is blackish with a white tip and gray underneath. The female has a blackish gray crown and sides of the head, dark gray upperparts with a reddish-brown tint; wings and tail brown and underparts reddish brown.

The male is very similar to the Northern Slaty Antshrike (Thamnophilus punctatus) but is darker and with white margins on the wings. The female resembles the female Spot-winged Antbird (Myrmelastes leucostigma) but this one has a lighter head and round wing spots.

In Colombia it reaches up to 400 m above sea level east of the Andes in Meta, Vichada, the Orinoco River and Guainía. They are also found in southern Venezuela, the Brazilian Amazon, and French Guiana.

It inhabits the understory and the middle level of the vegetation of flooded forests, gallery forests and shrub areas in savannas.

It feeds on beetles, ants, bed bugs, grasshoppers and spiders that it traps in vegetation.

Young have been registered in the month of January in Meta and in March in the upper Orinoco. Both sexes build a cup-shaped nest for which they use liana fibers and other dry herbaceous materials. They build it on the bifurcation of the branches of a bush and lay two thickly brown-stained white eggs.

Solitary or in pairs. They forage at heights that vary between 1 and 4 m and occasionally descend to the ground. It is observed hopping between low branches, pausing periodically to search the foliage and sometimes grasping branches to catch prey from the litter. Sometimes it joins mixed flocks.

It forms a superspecies with T. cryptoleucus, previously considered conspecific. The subspecies are different in their plumage pattern and have differences in their songs. It is possible that the Amazonian subspecies will be considered different species in the future.