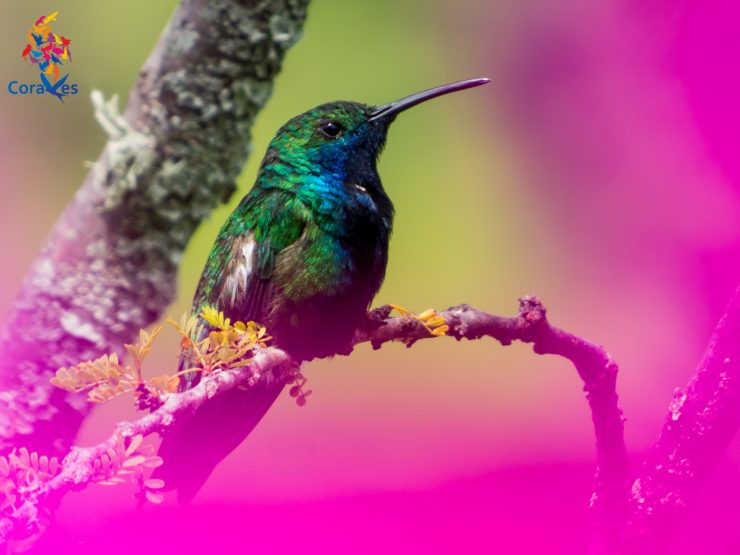 The Black-throated mango is a common hummingbird on the edges of the jungle and close to natural water deposits. It is the most widely distributed species of the genus and its name Anthracothorax comes from the Latin roots Anthrax = coal and thorax = chest. The epithet nigricollis derives from the Latin roots niger = black and collis = neck.

It is 10.2 cm long and weighs 7.2g. The longish black bill is slightly decurved. The tail in both sexes has dark central feathers, the outer tail being wine-red tipped with black.

The male has glossy bright green upperparts. His throat and chest are matt black, bordered with blue-green. The flanks are bright green, and the black of the chest tapers onto the belly.

The female black-throated mango has bronze-green upperparts and white underparts with a black central stripe. Immature birds show some grey or buff feather tips on the head and wings, and have brown around the eyes.

Formerly known as A. violicauda

This species is very similar to the closely related green-breasted mango. Although the male black-throated mango has more extensive black on the underparts, this and other plumage differences are not always easy to confirm in the field because the birds appear all-black. The females of the two species can be almost inseparable, although the black-throated lacks the more extensively coppery upperpart of its relative.

It breeds from Panama south to northeasterm Bolivia, southern Brazil and northern Argentina. It is also common on both Trinidad and Tobago. It is a local or seasonal migrant, with some birds moving up to 1000 miles, although its movements are not well understood.

This small bird inhabits open country, gardens and cultivation. Though it will adapt to human activity, it seems less of a generalist than for example the gilded sapphire (Hylocharis chrysura) or the sapphire-spangled emerald (Amazilia lactea).

The food of this species is nectar, often taken from the flowers of large trees. This hummingbird is also notably insectivorous, often hovering in open areas to catch flying insects. It appears to be somewhat picky regarding favorite foodplants and often does not visit ornamental plants popular with many other hummingbirds, such as Erythrina speciosa or Stifftia chrysantha; certain ornamental Bignoniaceae like the fountain tree (Spathodea campanulata) seem more to this bird’s liking. While feeding, it has been observed to dominate over a glittering-bellied emerald (Chlorostilbon lucidus) and to be displaced by a gilded hummingbird, both considerably smaller species.

The breeding season has been recorded from December to July. The male mates with several females. Their nest has been recorded at heights ranging from 8 to 15 meters, it is cup-shaped and is built by the female with plant fibers, seeds, lichens, moss, dry leaves and rootlets.

The black-throated mango’s breeding season lasts almost year-round in most of its range. It builds the nest nest on a high, thin, and usually bare branch. For this it uses fluff like seed down, cladding the outside with lichen. Nests are maybe 35–40 mm wide and 25–30 mm tall on the outside and some 25 mm wide and 10–15 mm deep inside. The two all-white eggs measure c.15 by 9.5 mm. They are incubated by the female for 16 or 17 days, and fledging takes another 24.

At a black-throated mango nest in Cuyabeno Faunistic Reserve, Ecuador, it was noted that the tree was beset with Pseudomyrmex stinging ants. This was also noted at a green-breasted mango nest on San Andrés Island (Caribbean). It is likely that the ants would deter predators, but it is not known whether the birds deliberately select such trees for nesting.

It is well known for hovering for aerial insects in open areas, often near areas with the presence of bodies of water. Occasionally found in flowering trees but generally more solitary.

At the national and international level, it is considered a kind of minor concern.