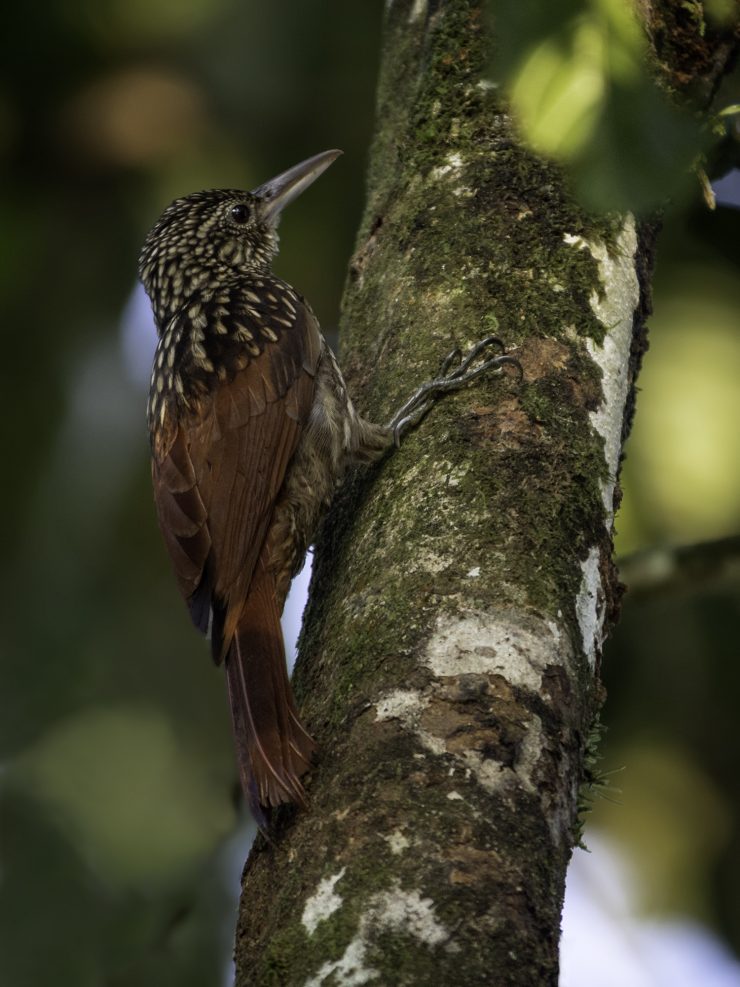 Own of Central America and the extreme northwest of South America. This Nuthatch is the only one with densely ridged tops and bottoms. Its name Xiphorhynchus comes from the Greek roots xiphos = sword and rhunkhos = beak. The epithet lachrymosus comes from Latin and means full of tears.

It measures 21.5 to 25 cm and weighs 51 to 66 g. Both sexes similar. It has dark reddish-brown irises, grayish legs, a long bill and slightly curved at the tip, dark brown to black, with a pale lower jaw. It has a brownish-black face striated with suede, crown and occiput with blackish-brown center of the feathers, producing a pattern of drop-shaped points. Its back and scapulars are similar, but more striated than intense suede; lower back, rump and remiges dark tan rufous with dark outer primary tips. Their major and minor coverts are rufous tan in contrast to the remaining brownish-black wing coverts. It has a rufous chestnut tail, pale throat to intense buff, pale buff chest and belly with brownish-black feather margins producing a scaly effect on the chest and striated on the belly; sides and flanks greyish brown with indistinct striatum, brownish undertail-coverts streaked pale buff, and inner wing-coverts buff. Youth have a more mottled pattern with more brownish feather margins, whitish underneath, and sooty black scaled throat.

Hard to mistake due to wide and sharp scaling pattern on top and bottom.

Three subspecies are recognized: X. l. lachrymosus, X. l. eximius and X. l. alarum. In Colombia are the lachrymosus races on the Pacific Coast and the alarum race in the lowlands of the north of the country. The latter differs from the nominal breed by stippling of the back and smaller lower parts.

It is found from the Caribbean Coast of Nicaragua and along both coasts of Costa Rica and Panama to Colombia and northern Ecuador. In Colombia it is found below 1500 m above sea level on the Pacific Coast and eastward through the lowlands of the northern Andes from the upper valley of the Sinú River to the middle valley of the Magdalena River to the height of Remedies in Antioquia.

In Colombia, individuals in reproductive condition have been registered from February to May in the northwestern part of the country. In Panama, individuals have been recorded entering log cavities at a height of 1 to 1.5 m, apparently the cavity of a nest. Nests have also been recorded in palm stumps and cavities in trees covered with pieces of bark or wood at heights ranging from 0.6 to 6 m. The size of its position is two eggs. Other aspects of their reproductive biology are unknown.

It forages alone, in pairs and sometimes adults with dependent youngsters can be seen. Sometimes it is observed with mixed flocks moving through the forest canopy. It climbs tree trunks and branches in spiral movements. It captures prey on the surface of branches and trunks, clumps of dead leaves, epiphytes and in cavities of bark. It is also commonly seen inserting its open beak into log crevices and flying out in pursuit of prey. Like other climbers, it also follows legionary ant marches but is never seen making exits to the ground to capture prey. It is usually quite aggressive when it follows ant marches.

It is listed as a species of least concern