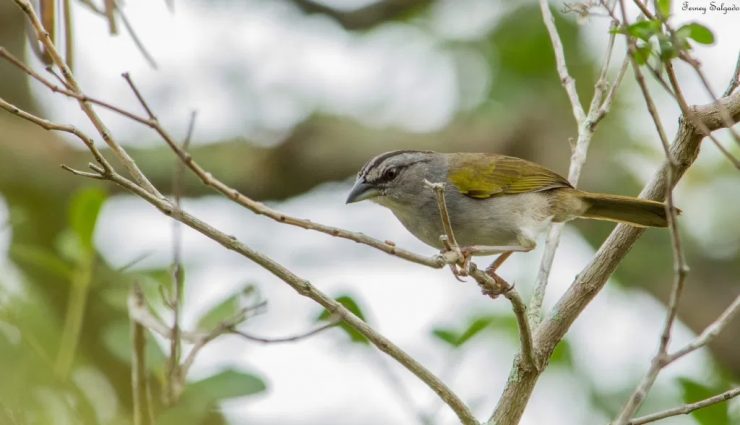 It is a fairly common species in arid to humid regions, replaced in La Guajira by the Guajiro Finch (Arremonops tocuyensis). Its name Arremonops derives from the Greek roots arrhemon = silent and ops = with the appearance of, referring to its inconspicuous habits and the fact that it resembles the species of the genus Arremon. Its epithet conirostris derives from the Latin roots conis = cone and rostris = beak, referring to its cone-shaped beak.

It is 16.5 cm approximately of length and weighs 26 to 42 g. It has a gray head with two black streaks on the crown and a black eye list that extends to the nape. Its upper parts are olive green with a little yellow in the curve of the wing. Its underparts are pale gray with a slightly whiter throat and washed flanks and undercoats olive buff. It has dark reddish-brown irises, blackish bill and grayish legs. Both sexes are similar and the young have a yellowish-olive head with dark brown streaks.

It can be confused with the Tocuyo Sparrow (Arremonops tocuyensis), but the latter is smaller, has paler upper parts, and its underparts are gray tinged with whitish (not obviously gray).

Seven subspecies are recognized A. c. richmondi, A. c. viridicatus, A. c. pastazae, A. c. striaticeps, A. c. conirostris, A. c. inexpectatus and A. c. umbrinus, which differ mainly in size and color of plumage. In Colombia we find the last four subspecies.

It feeds on a wide variety of insects, especially grasshoppers. It also feeds on seeds and fruits such as berries of the genus Miconia. Sometimes it also consumes small vertebrates (lizards and frogs). It is also likely to eat fruit trees such as bananas and oranges.

Young have been registered in May and October in Norte de Santander and Norte de Antioquia. Also nests in May in the department of Caldas and in April and May in Santa Marta. In some localities it is probable that it also breeds in December. The nest is built by the female, which is voluminous in the shape of an oven and a side or cup-shaped entrance. For its construction it uses thick leaves, ferns, grasses and weeds and places it 2 meters above the ground in dense vegetation. The size of the laying is 2 white eggs which only the female incubates for 13 to 14 days. The young are fed by both members of the pair and leave the nest on the 11th or 12th day after hatching.

It is an inconspicuous species that generally remains solitary or in pairs. Forages on or near the ground where it is seen jumping and sometimes climbs a few meters in bushes especially to sing.

The relationships between the species of this genus have not been well established. Molecular evidence suggests that it is closely related to species of the genus Rhynchospiza and some of the genus Ammodramus. Sometimes it has been considered conspecific with A. chloronotus with which it is sympatric in northern Honduras.