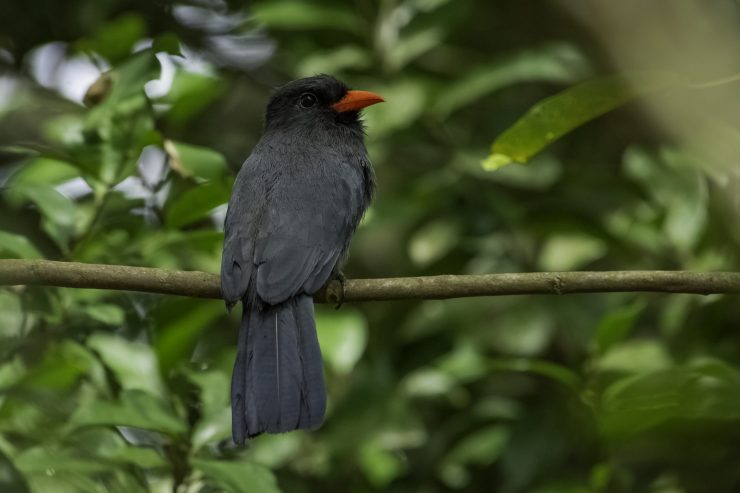 It is a noisy bird that lives in the lowlands east of the Andes and, unlike other species of the genus, it forages more frequently in the understory. Its name Monasa derives from the Greek monas, monos = lonely. The epithet nigrifrons means black forehead and derives from the Latin roots niger = black and frons = forehead.

It measures 26 to 29 cm and weighs 68 to 98 g. It has a red beak, dark iris, black legs, and a small, bare, dark area behind the eye. It has glossy black plumage, blacker around the bill and with a gray-blue back of the body. Its tail is black-blue in color, it has glossy black lower wing coverts. Immatures are dirty slate in color with irregular reddish markings.

Two subspecies M. n are recognized. nigrifrons and M. n. canescens. Only the nominal subspecies is found in Colombia.

This species is found in southeastern Colombia, eastern Ecuador, eastern Peru, eastern Bolivia and Brazil. In Colombia it is found below 500 m above sea level east of the Andes from the west of Meta and Vaupés to the south.

It feeds on small lizards and arthropods, including butterflies, crickets, wasps, termites, spiders, cicadas and bedbugs.

Individuals in reproductive condition have been recorded in June in Caquetá and short-tailed juveniles with adults near Leticia in November. Its nest a hole is excavated in a bank of earth or on flat ground approximately 1.5 m deep and 7.6 cm in diameter with a pile of thick, rotten branches covering the entrance. The size of its position is 3 eggs whose incubation period has not been documented.

It remains alone, in pairs or in small groups from low levels of vegetation to the canopy. It perches silently and flies to the ground, foliage, or the air to capture prey. He frequently follows primate troops taking the opportunity to capture the insects that the monkeys make fly and on occasions he also follows marches of legionary ants. Small groups are commonly seen lined up on perches from which they sing.

It forms a superspecies with M. atra and M. morphoeus.