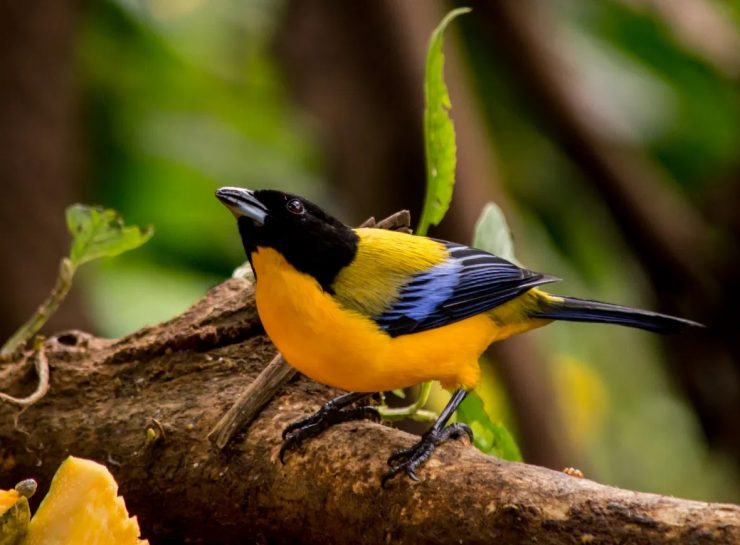 The Anisognathus notabilis is a medium-sized bird characterized by its yellow, black, blue-green color in the body and with a medium dependence on forests.

It is 18 and 19 cm of lenght with an average weight of 42 g with a jaundiced appearance. The forehead and sides of the head are black, a broad golden yellow streak only on the back of the crown, the rest of the body mainly black above, part of the back and bright yellowish olive back. The tail and rear of the wing broadly with a bright turquoise blue margin and sharp bill.

It is easily confused with the Anisognathus somptuosus which differs by a not so sblete shape, less sharp bill, contrasting black back with the head and yellow list all over the crown. The wings with blue margins not so bright and less wide, which is difficult to identify in the field.

It is a local but rare bird, it is distributed between 900 and 2000 m in height. It is located on the Pacific slope from the headwaters of San Juan, Chocó (W slope of Cerro Tatamá) to the S. W of Colombia and W of Ecuador.

It is found in the middle to upper levels in very humid forests with abundant moss and borders.

It feeds on fruits and insects, having a preference over fruits. Searches inland forests at mid-height of the forest canopy. It takes berries from plants of the genus Miconia without so many acrobatics, it usually uses agile movements in a still position to obtain the fruits, as it is with the case of Cecropia fruits where it is hung upside down. He swallowed the whole fruit and chewed some of them and peeled them off. Search for insects nimbly and quickly preferably on bare branches that may be without much moss.

It forms pairs or groups between 5 and 6 individuals actively jumping on external branches or in terminal foliage, it is also usually seen as solitary or with mixed flocks, especially in the middle of the canopy. It is a very active bird, moving without rest and despite its height and weight it is very agile.

Anisognathus notabilis and Anisognathus somptuosus were placed in separate Compsocoma genera. Usually treated as conspecific with A. somptuosos, but differ markedly in voice and plumage. Genetic and vocal analysis is still pending

It is a bird that despite being a tanager has the appearance of a turpial because of its posture when it comes to landing somewhere.