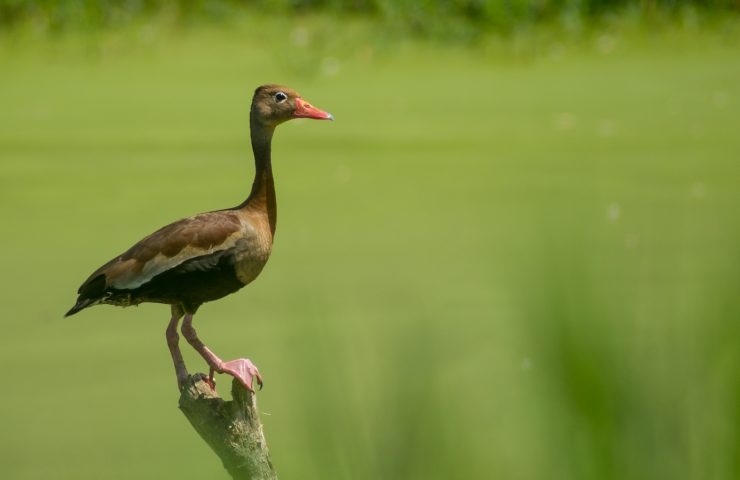 The black-bellied whistling duck (Dendrocygna autumnalis), formerly also called black-bellied tree duck, is a whistling duck that breeds from the southernmost United States and tropical Central to south-central South America. In the USA, it can be found year-round in parts of southeast Texas, and seasonally in southeast Arizona, and Louisiana’s Gulf Coast. It is a rare breeder in such disparate locations as Florida, Arkansas, Georgia, Tennessee, and South Carolina. There is a large population of several hundred that winter each year in Audubon Park in uptown New Orleans, Louisiana. Since it is one of only two whistling-duck species native to North America, it is occasionally just known as the «whistling duck» in the southern USA.

The black-bellied whistling duck is a mid-sized waterfowl species. Length ranges from 47 to 56 cm (19 to 22 in), body mass from 652 to 1,020 g (1.437 to 2.249 lb) and wingspan ranges from 76 to 94 cm (30 to 37 in). It has a long red bill, long head and longish legs, pale grey head and mostly grey-brown plumage. The belly and tail are black, and the body plumage, back of the neck and cap are a rich chestnut brown. The face and upper neck are grey, and they sport a thin but distinct white eye-ring. The extensive white in the wings is obvious in flight, less so on the ground; it is formed by the secondary remiges while the primaries are black; the wing-coverts are brown. Males and females look alike; juveniles are similar but have a grey bill and less contrasting belly.

The wing bar is unique among living whistling ducks. When on the ground, it may be hard to discern the light flanks present in many of these waterfowl. The fulvous whistling duck (D. bicolor) is the only sympatric whistling duck that shows such a whitish flank stripe, and it differs from the black-bellied by having dark wings and a lighter belly rather than the other way around. Juvenile D. autumnalis are quite similar to young of the white-faced whistling duck (D. viduata), which have a darker bill and no white wing patch; even when sitting they never seem to show white along the sides, as their thin white vertical barring on the black flanks is very indistinct.

Anas autumnalis is considered synonymous with Dendrocygna autumnalis. The subspecies D. a. autumnalis was called some time ago D. a. fulgens.

There are two subspecies, which intergrade in Panama:

Prior to 1978 birds in N America were considered to belong to the ssp. D. a. autumnalis because the type specimen was from the West Indies where both taxa occur.

Black-bellied whistling ducks rarely move long distances, but these birds were seen near Saltsburg in Pennsylvania. They may be vagrants or escaped from aviculture.

The black-bellied whistling duck is a common species that is «quite tame, even in the wild». It is highly gregarious, forming large flocks when not breeding, and is largely resident apart from local movements. It usually nests in hollow trees. The habitat is quiet shallow freshwater ponds, lakes, and marshes, cultivated land or reservoirs with plentiful vegetation, where this duck feeds mainly at night on seeds and other plant food.

Feeding often occurs nocturnally, but they can be encountered eating at any hour of the day. Black-bellied whistling ducks ingest a wide variety of plant material, but also consume arthropods and aquatic invertebrates when available. They often feed on submerged vegetation by wading through shallow water. As its Latin name (autumnalis) implies, it is commonly seen gleaning recently harvested fields for leftover seeds and invertebrates brought up by the harvesters disturbing the soil.

The black-bellied whistling duck is mainly non-migratory. Birds in the extreme northern portions of their range (Arizona, Louisiana, and parts of Texas) move south in winter. At the heart of their range, there is a tendency to travel in flocks over the winter months, though this behavior is not a true long-range migration but rather local dispersal. 7 adults and 8 ducklings were observed on west side of Lake Apopka, Central Florida, 7-24-15. They have been in this area for more than a year. There has been a large flock noted for about two years in the River Plantation area of Parrish in Manatee County, Florida. A large flock was observed and photographed by a local resident in Audubon Park, New Orleans, Louisiana in February 2016. Over 100 of the whistling ducks have resided in the Gum Slough of Sumter County, Florida for over 2 years.

The black-bellied whistling duck is quite unique among ducks in their strong monogamous pair-bond. Its pairs often stay together for many years, a trait more often associated with geese and swans. Both parents share all tasks associated with the raising of young, from incubation to the rearing of ducklings. The ducks, primarily cavity nesters, prefer the confines of a hollow tree, but will nest on the ground when necessary. They also make use of chimneys, abandoned buildings, or nest boxes, the latter having been increasingly provided to them over recent decades, especially in southeast Texas and Mexico. Ducklings leap from nest cavities within two days of hatching, can feed themselves immediately, and stay with the parents for up to eight weeks.

It is a gregarious bird that forms small groups. It is active day and night and is characterized by perching and sleeping on tall tree branches. It feeds mainly by grazing, a behavior to which some morphological adaptations of the beak have been attributed in comparison with species of the same genus that feed in water. Their courtship behavior is similar to that of a Swan which includes basic displays such as: elongations of the neck, plunges and crouches of the head. The northern populations migrate to Central America where they spend the winter, while the remaining populations are sedentary but carry out local movements.

This species is not considered to be of conservation concern by the IUCN and the National Audubon Society; its global population is estimated at 1,100,000-2,000,000 birds.

As the name implies, these are noisy birds with a clear whistling waa-chooo call.