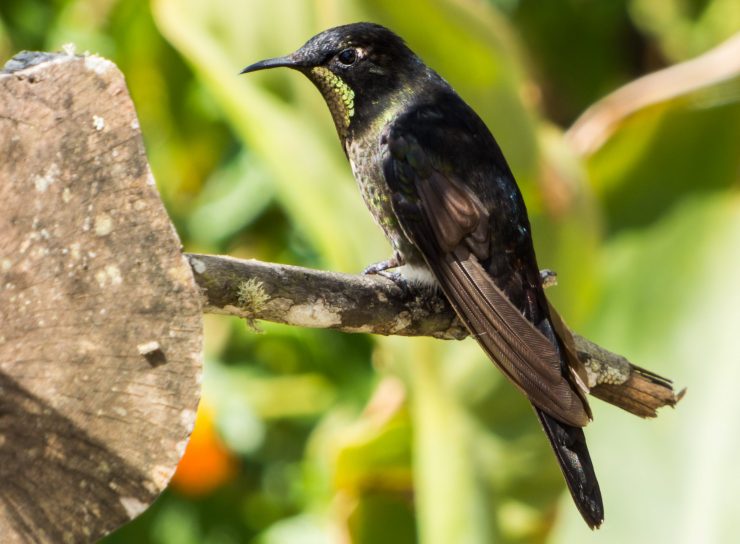 Hummingbird of average size. This particular hummingbird has a very short beak. Its tones range from blacks, through iridescent golds and greens. Long and forked tail. Inhabitant of humid forests.

This hummingbird has a size of 10.2cm. Its beak is quite short, measuring only 8mm. The male has the head and all the upper parts in a black hue. The center of its throat is an iridescent greenish-gold color. His chest, brown green. The rest of the underparts are dark gray with green discs. It has a long, very forked tail in a purplish-black hue. The female, above, is bronze-green in color. Underneath is white suede. Its throat and flanks have green discs. The rest of its underparts are dark gray with green discs and it has a rather long tail, but shorter than that of the male; also forked in a purplish-black hue. External straight lines with white apex.

The male is easily distinguished by having black underparts and a short bill. The female of M. Redstart shows a rufous hue underneath.

Black-backed Thornbill is a Monotypic species.

This hummingbird is endemic. Between 2000 to 4500m. It was observed that 1 male immigrated at 900 m in the area of ​​the Sierra Nevada de Santa Marta.

It is relatively uncommon in the edges of humid and very humid forests at a medium height. It also inhabits open slopes near the lines of arboreal vegetation and in moorland up to the snow. There are marked seasonal altitudinal movements in the San Lorenzo region (2200) only in late May and early June.

It feeds of arthropods and the nectar of Ericaceae, Erythrina, Lobeliaceae, Melastomataceae, Puya, Rubiaceae and Salvia. They forage at all levels but spend much of their time in the canopy where they gather with other hummingbirds at flowering trees or pause to perch in the treetops

Its behavior is very similar to that of Pico de Tuna Morado. Usually seen in tree canopies often posing exposed. One or more of them meet other hummingbirds in flowering trees. It forages by fluttering in front of the flowers. Occasionally seen hunting insects in the foliage.

This species is currently considered of Least Concern.

Its call is described as short «“trrr” sounds.