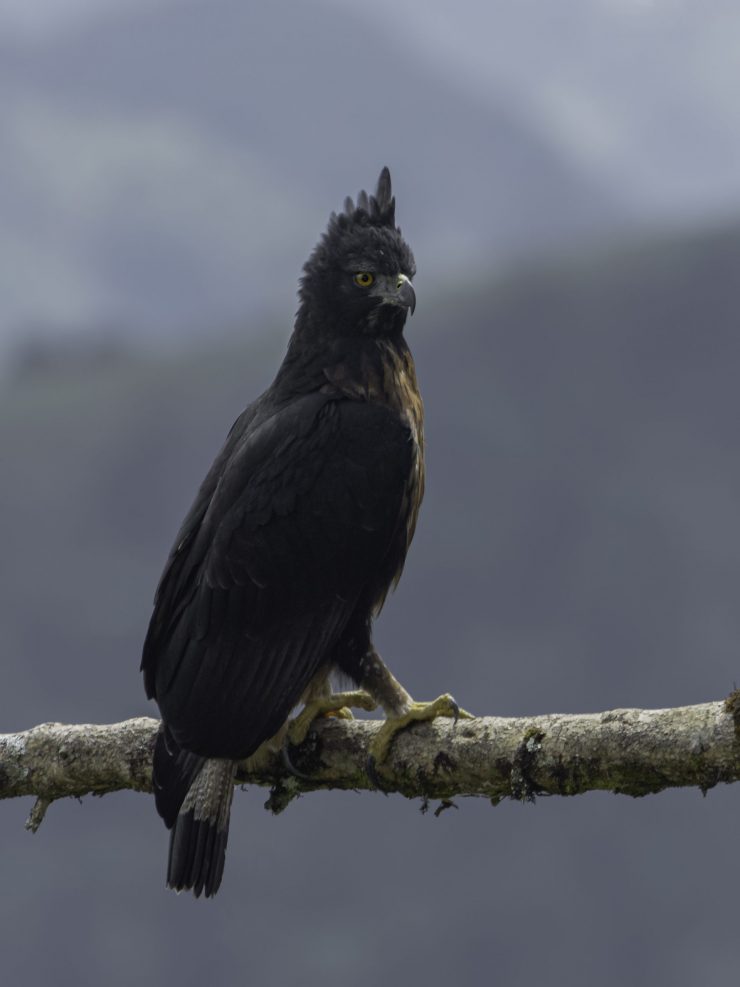 The black-and-chestnut eagle (Spizaetus isidori) is a South American species of bird of prey in the family Accipitridae. It is sometimes called Isidor’s eagle.[ It is often placed in the monotypic genus Oroaetus.[2] However, recent genetic testing indicates that this species is fairly closely related to Spizaetus species and thus the species has been found inclusive with the latter genera.

This is a fairly large eagle at 63 to 74 cm (25 to 29 in) long with a wingspan of 147 to 166 cm (58 to 65 in). It is largest current member of the genus Spizaetus, with the smallest males somewhat larger than the largest female ornate hawk-eagles.[ As an adult, this species is glossy black on the head and the back and a streaky chestnut on the underside, much of the wing primaries and legs. The juvenile bird is very different, being whitish over the head and body with a buffy wash underneath and scaly gray on the back and wings.

Formerly located within the monotypic genus Oroaetus. Molecular studies confirmed that Oraetus is more related to Spizaetus and is a sister species to S. ornatus and S. melanoleucus. This species was then included within Spizaetus by the SACC in 2006.

It looks like the Iguanera Eagle (Spizaetus tyrannus) but this one is darker underneath. In its immature state it resembles the Crowned Eagle (Spizaetus ornatus) but it is whiter and does not have a mottled «dirty» appearance.

It is found humid montane forests, normally at elevations between 1,800 to 2,500 m (5,900 to 8,200 ft), in the Andes from northern Argentina, through Bolivia, Peru, Ecuador, Colombia, to Venezuela, with isolated populations in the Venezuelan Coastal Range, Serranía del Perijá and Sierra Nevada de Santa Marta. It is generally local and rare.

It regularly climbs to low and moderate altitudes over forest edges, forest patch areas and clearings, river valleys, and mountain ridges. It is seen perched on the treetops.

Nest building is February and March, laying eggs in April and May and fledgling young by August and September. It builds a huge stick nest about 2 m (6.6 ft) across and 1 m (3.3 ft) deep. Clutches include 1 to 2 fledglings. At the nest area, adults primarily bring squirrels to their young. In Argentina, it was recorded that the female visited the nest more times and invested more time into nest building than males do. The female was responsible for the incubation and incubated every night in Argentina, while the male provided preys for both and briefly incubated when the female went out of the nest. After hatching, the female does all of the chick covering, feeding and defense were only carried out by the female, whereas the male provided prey. These are typical parental behaviors by raptors and eagles, but seem somewhat more rigidly divided in this species as the male never appears to take on brooding responsibilities in the black-and-chestnut eagle.

They are known to prey on woolly monkeys, possibly other monkeys including capuchins, porcupines, coatis, squirrels and other small-to-mid-sized arboreal mammals. Large birds such as guans are also seemingly often taken. They frequently have much abraded tails by plunging after prey through the branches. They overlap in range with several other large forest eagles, including other Spizaetus eagles, but few interactions have been reported and, as they often occur at slightly different altitudes than other neotropic forest eagles, the black-and-chestnut eagle is believed to be normally the top avian predator in its range. One exception is the similarly sized solitary eagle, which preliminary reports suggests mostly hunts snakes, whereas the black-and-chestnut eagle seems to prefer birds and small-to-mid-sized mammals, and the two species were observed flying near each other without aggression in southeastern Peru since prey partitioning appears to allow them to co-exist. One species seen to be aggressively displaced by the black-and-chestnut eagles here was the turkey vulture, possibly because they sometimes steal eggs from bird’s nests. Black-and-chestnut eagles sometimes hunt chickens, including standard-sized adults, which has caused some persecution of this endangered species. One small dietary study was conducted in Colombia, however, found that chickens made up 14.7% while wild Andean guans were much more frequently taken, making up 53.9% of the diet. Also, here the black-and-chestnut eagles took about the same number of western mountain coatis as they did chickens, and coatis are known predators of poultry chicks and eggs.

Widespread cutting of primary forest in foothills throughout the Andes is the primary cause of the precipitous decline of this species. There may be only 370-1500 individuals of black-and-chestnut eagles left in the wild (and 250-999 mature individuals), fewer than previously thought. It is one of the most endangered birds of prey in the Americas.[ Further exacerbating the species’ conservation issues are its continued persecution as a killer of domestic fowl.