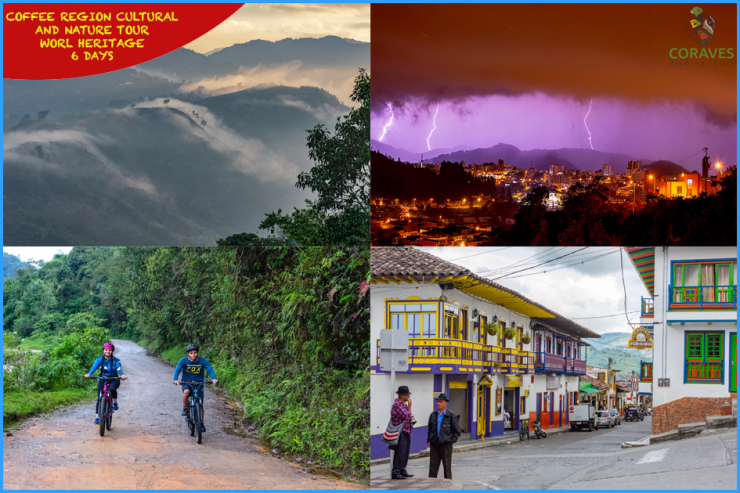 The Colombian Coffee Region (Spanish: Eje Cafetero), is a part of the Colombian Paisa region in the rural area of Colombia. It is famous for growing and producing the majority of Colombian coffee, considered by many to be the best coffee in the world. There are four departments in the area: Caldas, Quindío, Risaralda and Valle del Cauca. The most visited cities are Manizales, Armenia, Pereira, and Cali. This region was declared as a World Heritage region in 2011 (Coffe Cultural Landscape of Colombia).

Coffee was first grown commercially in Colombia in Salazar de las Palmas, north of Santander, and over the twentieth century grew to be Colombia’s primary export. When coffee was first brought into the country, the leaders tried to push the farming of coffee beans, but was met with resistance from the people because it takes about 5 years until the first harvest of the bean. In 1999 coffee revenues represented 3.7% of gross domestic product (gdp) and 37% of agricultural employment. The main coffee-producing departments are: Nariño, Norte de Santander, Antioquia, Valle del Cauca, Huila, Tolima, Caldas, Risaralda, Quindio and Cundinamarca.

The area between the departments of Caldas, Risaralda, Quindío and Cali is known as the Coffee Zone because of the large development experienced by the cultivation of this product. This region was strongly affected by an earthquake that was 6.4 on the Richter scale on January 25, 1999, but subsequently the region’s economy recovered rapidly.

Weather conditions (8 °C to 24 °C), geographical (Andean Rainforest) and the geological region, determine the production of high quality coffee, with relatively short harvest periods. Farmers in the area have developed techniques for growing, harvesting and processing of grain, and all done «grain by grain», and have retained this form of processing industry despite new techniques of mass agricultural industrialization.

The famous advertising icon «Juan Valdez«, represented by a Paisa farmer wearing a carriel, aguadeño hat and poncho, and accompanied by a mule, has become a triumph of advertising communication. Juan Valdez has been considered in United States as the advertising image of greater recall among the inhabitants of that country in the year 2005.

The region has developed major theme parks such as the Colombian National Coffee Park located in the town of Montenegro in Quindio. In the area is also the Museum of Culture Coffee, showing the process from grain production to savoring a traditional Colombian coffee. This museum, like all the other theme parks, are replicas of the colonial city, where tourists enjoy dance performances and traditional music, panoramic views from cable car with its lush landscape, and various rides.

Another unique theme park in Colombia is the National Park of Culture Agriculture – ‘Panaca’, also located in the Municipality of Quimbaya in Quindio. Its key feature is that, unlike zoos, visitors are immersed in a personal and direct contact with farm animals and also enjoy scheduled activities and events with those animals.

Other attractions in the area include:

The Coffee region is also very good for birding due to the variety of ranges and presence of the western and central Andes, also due to tropical forests and paramos; there is possible to see more than 1.000 species with almost 30 endemics and 20 near endemics. This region also has very good infrastructure to receive its tourists.