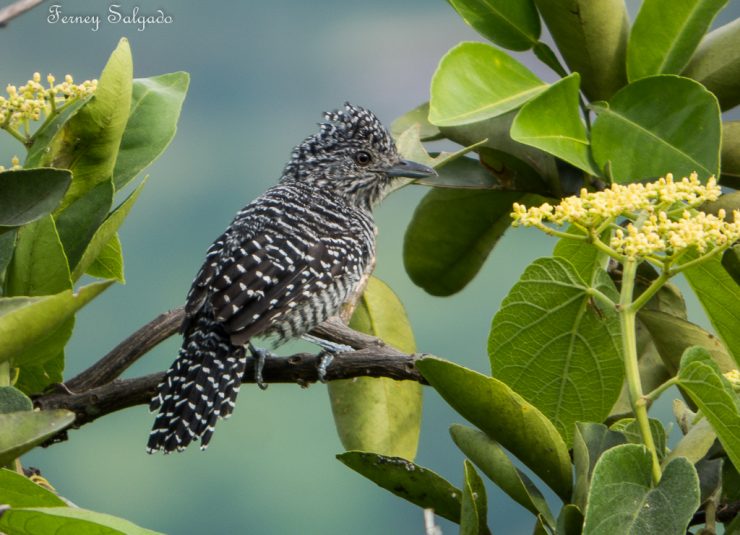 Populations of this species are found mainly in Colombia and a small portion of northwestern Venezuela. Its name Thamnophilus comes from the Greek roots thamnos = bush and philos = lover of. The epithet multistriatus comes from the Latin roots multi = much and striatus = striated.

It measures 15 to 16.5 cm and weighs 21 to 23 g. It is a bird with a crest and a yellow iris. The male is completely barred in black and white, except in the region that extends from the nape to the throat, where it is striated. The female has rufous crown, upperparts, wings and tail with the crown slightly darker and separated from the back by a narrow band of black and white or pale reddish brown striations. It has black and white striations on the sides of the head and throat, bars of the same color on the lower parts, and a reddish-brown tint on the flanks. The subadult male has a yellowish brown tint.

This species is found in Colombia and in the extreme northwest of Venezuela. In Colombia it is distributed from 900 to 2,200 m above sea level (on the Pacific slope up to 400 m) in the Western mountain range and on the western slope of the Central mountain range in the departments of Antioquia, Quindío, Valle del Cauca and Cauca. On the eastern slopes of the Central Andes in eastern Antioquia, eastern Caldas, eastern Tolima, Huila and eastern Nariño. In the Eastern mountain range in its western slope in Cundinamarca and Santander and in its eastern slope in Norte de Santander and Boyacá. Also in the Serranía del Perijá.

It lives in dry to humid forests where it uses clearings and weedy edges. It also uses cultivated areas, gardens and parks with scattered bushes and trees.

Their diet is presumed to be primarily arthropods. Seeds of Punica granatum (Lythraceae) have also been recorded in its stomach contents.

Forages singly or in pairs from the lower layer of vegetation to the sub-canopy. It is most easily detected by its loud and fast singing.