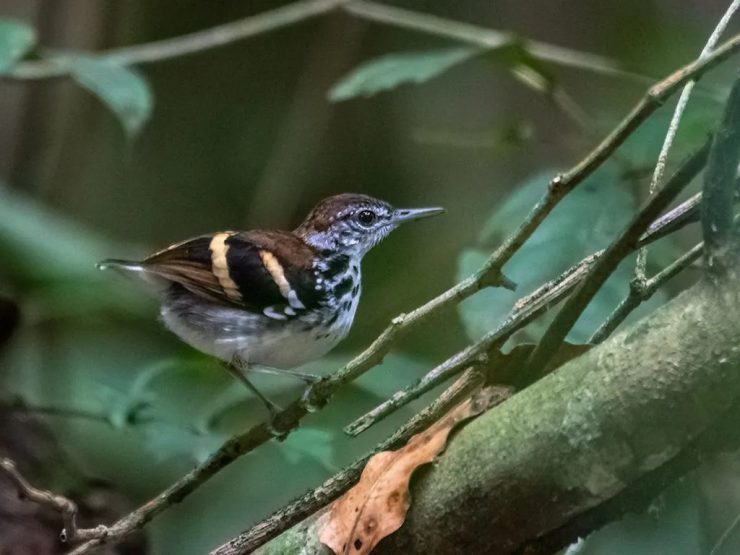 The Banded Antbird (Dichrozona cincta), is a species of passerine bird of the Thamnophilidae family, the only species of the genus Dichrozona. It is native to the Amazon region in South America.

It is the only species of the genus and its phylogenetic relationships are uncertain. Its name Dichrozona comes from the Greek roots dikhroz = two colors and zone = belt. The epithet cincta comes from the Latin cinctus = banded

It measures between 9 and 10 cm in length and weighs between 14 and 15.5 g. The tail is short and the bill is long and slender. It presents sexual dimorphism. The male is brown chestnut above, with a narrow white superciliary list, the lower part of the back and the rump are black, crossed by a visible white band; wings are black with two visible yellowish-brown bars, outer tail feathers are white. Underneath it is white with a band of black dots across the chest. The female is similar but with a yellowish brown rump and slightly more yellowish brown below.

It could be confused with the Spot-backed Antbird (Hylophylax naevia) which differs by having a black throat, a dotted back with buckskin and lacks a black band on the supracaudal coverts.

It is distributed in the extreme southwest of Venezuela (southwest of Amazonas), south central and southeast of Colombia (along the eastern base of the Andes south from Meta and east of Guainía), eastern Ecuador, eastern Peru, and northwest and south of the Amazon in Brazil (upper Negro river basin, and from the west of Amazonas east to Pará in the Xingú river basin and south to Acre and north of Rondônia) south to north-west of Bolivia (Pando, Beni, La Paz).

In Colombia it is found east of the Andes below 500 m above sea level from the south of Meta and southeast of Guainía towards the south of the country.

This species is uncommon in its natural habitat, the terra firme humid forest floor, where it prefers areas with more open understory. Mainly below 450 m of altitude.

The genus Dichrozona was described by the American ornithologist Robert Ridgway in 1888, being the type species Dichrozona zononota, today synonymous with the present species.

The kinship relationships of this species are doubtful. The specimens at the ends of their range differ in plumage coloration; the possible subspecies stellata and zononota were described primarily in terms of the darkness and coloration of the crown and back, the darkness and extent of gray on the flanks, and the size and quantity of the points on the chest, but the Comparative documentation appears to be insufficient and further studies are required.

According to the classification of the International Ornithological Congress (IOC) (Version 7.2, 2017) 3 subspecies are recognized, with their corresponding

The Clements Checklist v.2016, and Birds of the World classifications do not recognize subspecies.

Very little is known about its diet, it probably consists of various insects and other arthropods.

Very little is also known about their reproductive habits. A single nest described in eastern Ecuador was in the form of an open cup, placed 1 m from the ground, in a fork of a low bush in the jungle.

It walks slowly through the forest where it forages using stabbing movements and probing the debris with its beak, although it also sometimes lifts the litter in search of hidden prey. Sometimes it is also seen jumping to capture prey by gleaning on hanging leaves or branches. While walking on the ground it tends to move its head forward, fan its tail and flap its wings, exposing the white parts of the tail. Generally, walks alone, less often in pairs and never with mixed flocks.

The song is a long series of up to 15 «puiíi» notes, with a strange piercing chime quality, persistently given at about one note per second.