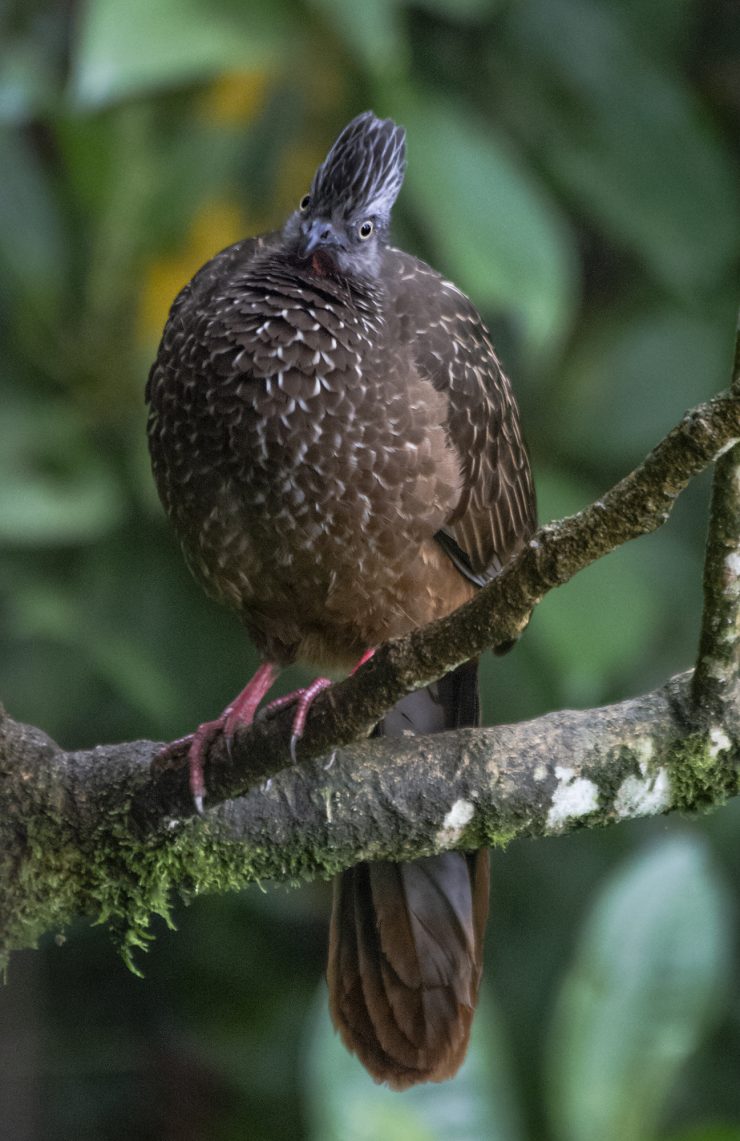 This turkey has a restricted geographic distribution to the north of Colombia and Venezuela. It is distinguished from other turkeys by a pale caudal band. The origin of her name Penelope is unclear. It could derive from the Greek penelops, which refers to a type of duck from which in Greek mythology it is said that it rescued and fed Penelope (daughter of Icarus and wife of Ulysses) after her parents threw her into the sea. The epithet argyrotis comes from the Greek arguros = silver and otis = ear.

It forms a superspecies with P. barbata, with which it has sometimes been considered conspecific. The Colombian subspecies has come to be considered as a distinct species and it has been proposed that the albicauda race could be fused with the nominal subspecies. The populations of northern Colombia and western Venezuela and northern Venezuela have come to be classified as subspecies mesaeus and olivaceiceps respectively, but their differences are too slight to recognize this separation.

It measures from 50 to 61 cm. It has a relatively long tail and neck, a dull blue naked eye area, red ruff and legs. Presents frosty white eye list and sides of head, upperparts brown to rufescent brown with lateral margins of mantle feathers and white chest. Its tail has a broad rufous terminal band.

It is found in the north of Colombia and Venezuela. In Colombia it is distributed from 900 to 2300 m above sea level and is found in the Sierra Nevada de Santa Marta (Colombian), the Serranía de Perijá (albicauda) and the northeastern end of the Eastern mountain range in Norte de Santander towards the south by the eastern slope to the west of Meta.

It lives in humid forests where it is a rare bird. It prefers undisturbed primary forests, but sometimes also uses secondary forests, dry forest edges, and coffee plantations.

It is distinguished from other turkeys because it is the only one with a pale tail band, although this mark is not always easy to see. It resembles the Andean Guan (Penelope montagnii) but the latter has a small ruff, lacks a caudal band, superciliary and white sides of the head.

Three subspecies are recognized P. a. albicauda, ​​P. a. colombiana and P. a. argyrotis. The albicauda breed has the tips of the tail of a whitish buff color and the Colombian subspecies has the feathers of the crown with white edges and less white on the superciliary.

It feeds mainly on fruits such as those of several species of the Lauraceae family and Cecropia catkins (Urticaceae). Occasionally goes down to the ground to feed on fallen fruit. Drink water collected in bromeliad leaves or heliconia flowers.

In Colombia, individuals in reproductive condition have been registered from January to September. Also chicks in April and June in the Sierra Nevada de Santa Marta. In Venezuela they begin to break up groups and establish territories in January and build nests from February to May. Build a loose nest with plant material, usually at heights ranging from 1 to 8 in trees of the Rubiaceae family.

It is a gregarious bird; it stays in family groups or in flocks. It is of arboreal habits except when it comes down to the ground to feed or drink. It is quite quiet and hidden except during the breeding season, when it also becomes quite territorial.