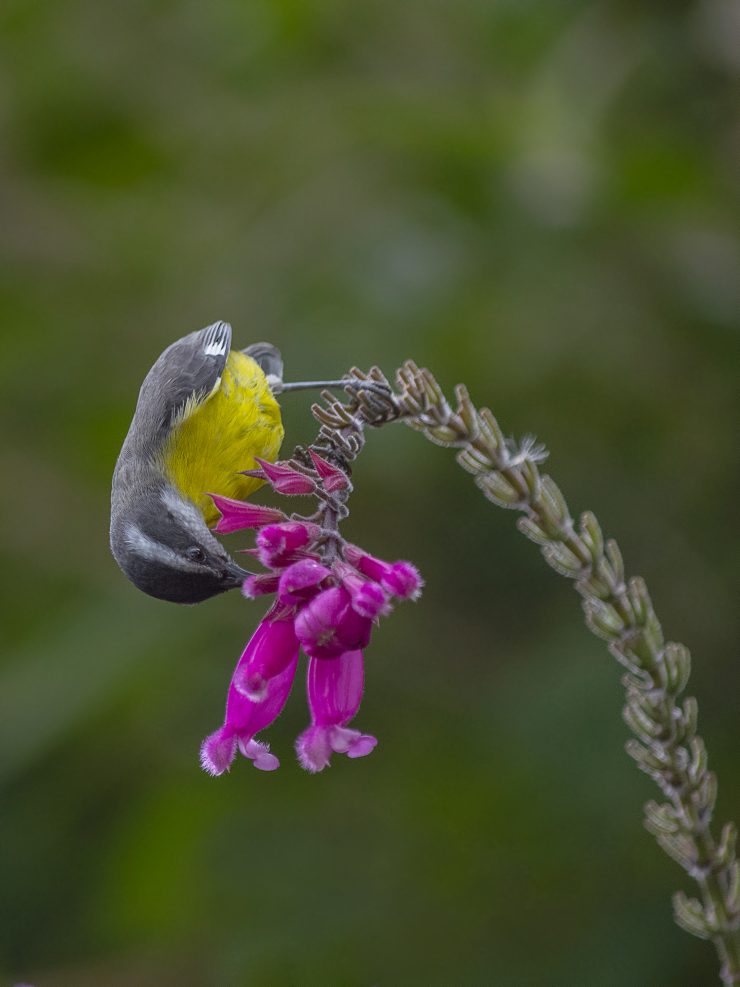 The bananaquit (Coereba flaveola) is a species of passerine bird of uncertain relation. It is tentatively placed in the tanager family, but classified as incertae sedis by other authorities such as the American Ornithologists Union. Its classification is debated, and it is often placed in its own family: Coerebidae. It has recently been suggested the bananaquit should be split into three species, but this has yet to receive widespread recognition. This small, active nectarivore is found in warmer parts of the Americas, and is generally common.

Most subspecies of the bananaquit have dark grey (almost black) upperparts, black crown and sides of the head, a prominent white eyestripe, grey throat, white vent, and yellow chest, belly and rump.

The sexes are alike, but juveniles are duller and often have a partially yellow eyebrow and throat.

The bananaquit was first described by Linnaeus in his Systema Naturae in 1758 as Certhia flaveola.[2] It was reclassified as the only member of the genus Coereba by Louis Jean Pierre Vieillot in 1809.[3] Prior to 2005, the bananaquit was assigned to the monotypic family Coerebidae; there is currently no agreement to which family it belongs; some authors place it into the Emberizidae.[4] Since recent studies have shed some light on the bananaquit’s affinities, many authorities consider Coerebidae an obsolete taxon. The Coerebidae used to contain other nectar-eating birds from the tropical Americas, but these have since been moved. The bananaquit is part of a group that includes Darwin’s finches, Tiaris (grassquits), Loxigilla, etc.—most of which were previously placed in Emberizidae, but are now known to actually be part of the Thraupidae. As such this species is tentatively placed in the family Thraupidae unless a study suggests more accurate placement. Nevertheless, its precise relations remain unresolved, so the American Ornithologists’ Union classes it as a species incertae sedis.

It is resident in tropical South America north to southern Mexico and the Caribbean. It is found throughout the West Indies, except Cuba. Birds from the Bahamas are rare visitors to Florida.

It occurs in a wide range of open to semi-open habitats, including gardens and parks, but it is rare or absent in deserts, dense forests (e.g. large parts of the Amazon rainforest) and at altitudes above 2,000 m (6,600 ft).

They feed mainly on nectar and to a lesser extent on berry-type fruits and insects.

Individuals in reproductive condition have been recorded in the country for almost the entire year. Build an oval nest with a circular entrance at the bottom, using dry grasses and a wide variety of plant fibers. It places it at a height that ranges from 1.5 to 4 m and less frequently at heights that can reach up to 15 m. The size of its position is 2 to 4 pale white eggs with brown spots which only the female incubates for 12 to 13 days. The young are fed by both parents and leave the nest between the 17th and 19th day after hatching. The nests can be reused and the construction of nests for roosting is common in this species.

The bananaquit has a slender, curved bill, adapted to taking nectar from flowers. It sometimes pierces flowers from the side, taking the nectar without pollinating the plant.[18] It also feeds on sweet juices by puncturing fruit with its beak, and will eat small insects on occasion. While feeding, the bananaquit must always perch as it cannot hover like a hummingbird.

The bananaquit is known for its ability to adjust remarkably to human environments. It often visits gardens and may become very tame. Its nickname, the sugar bird, comes from its affinity for bowls or bird feeders stocked with granular sugar, a common method of attracting these birds. The bananaquit builds a spherical lined nest with a side entrance hole, laying up to three eggs, which are incubated solely by the female. It may also build its nest in man-made objects, such as lampshades and garden trellises. The birds breed all year regardless of season and build new nests throughout the year.