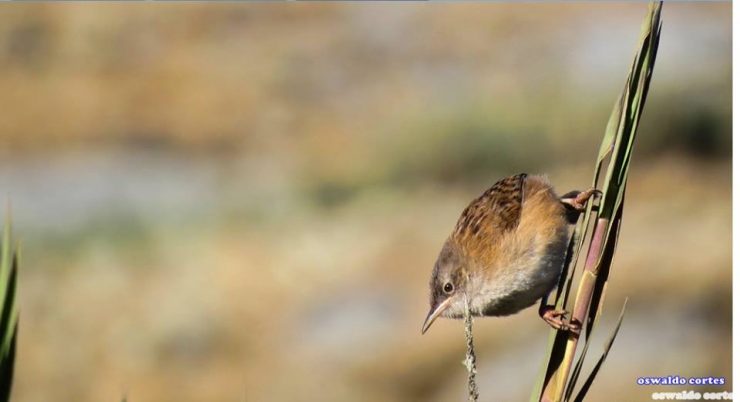 The Apolinar’s Wren is an ENDANGERED species and endemic to the Eastern Cordillera of Colombia. It is one of the most emblematic birds of the wetlands of the Sabana de Bogotá. Its name Cistothorus means that it jumps bushes, derived from the Greek kisthos = bushes and thouros = that jumps. The apolinari epithet is in honor of Apolinar María, founder of the Colombian Society of Natural Sciences.

It measures about 13 cm. Very similar to the Sedge Wren (C. platensis). The Apolinar’s Wren has a uniform olive-brown crown and a grayish superciliary list. The striated coat is black and buff white and the rump is light brown. Their wings and short tail are rufescent barred black and their whitish underparts with dull buff flanks and sides. The beak and legs are horn-colored.

Very similar to the Sedge Wren (C. platensis) but this one is smaller.

There are two subspecies of C. Apolinari morphologically differentiated and apparently also segregated by habitat use: C. a. apolinari inhabits the wetlands of the Cundiboyacense plateau and C. a. hernandezi in the wetlands of themoorlands with vegetation dominated by Diplostephium revolutum, Chusquea tessellata and some species of Hypericum in the  Sumapaz’s moorland.

It is an endemic species. It is distributed between 1800m and 4000m, but usually over 2500m. It is found in the northern portion of the Eastern Cordillera in northern Boyacá and in Cundinamarca from the southern Bogotá Sabana to the Sumapaz Páramo.

It feeds on aquatic insects found in vegetation such as chironomids, also on spiders, braconids, cylindrical, zygoptera and lepidopteran larvae.

Nesting seasons are in March and August. Build an oval-shaped nest, with dry leaves or straw on the outside, and with flowers, leaves and plant material with villi on the inside, with a single entrance, on the reeds or vines. The subspecies hernandezi is dependent on Chusquea tessellata for nesting sites.

Usually sings from its semi-exposed perch but is hidden in tall reeds and very difficult to see. May form loose colonies. Their singing is composed mainly of low notes, with a characteristic twii sound and makes a territorial call that sounds like tchorr. However, the subspecies hernandezi apparently has 11 different forms of song, more than the subspecies apolinari, which has 6 or 7.

Cistothorus apolinari forms a superspecies together with C. platensis and C. meridae. The subspecies hernandezi differs especially in habitat use and social structure. Phylogenetic and natural history studies are required to clarify the status of this taxon.

In danger. This is due to its endemic status and the destruction of the habitat in which it is found. C. apolinari is a species threatened with extinction, so the discovery of new populations is of particular interest for conservation.

C. a. Apolinari deserves a lot of attention as it is very affected due to the few subsistence wetlands and the breeding parasitism by Molothrus bonariensis. There are likely fewer than 250 adults currently (Cadena 2003).

It is also known as the Swamp Wren or Squeaky Wren.