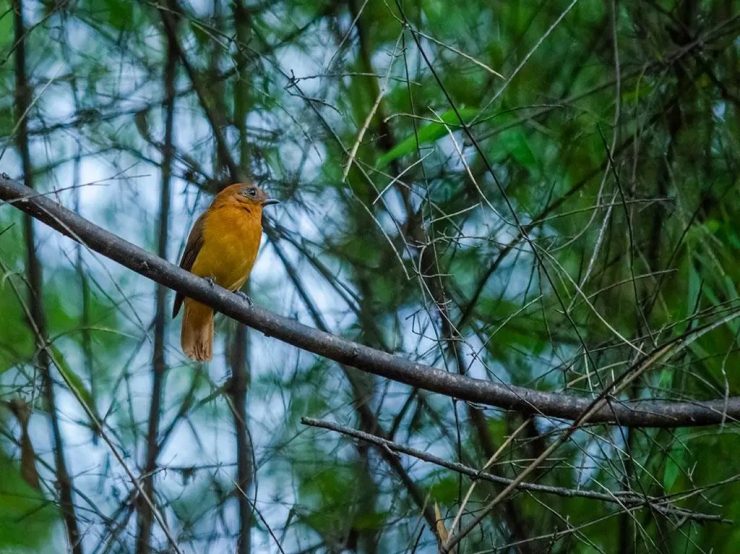 The varzea schiffornis (Schiffornis major), also called várzea mourner or greater schiffornis, is a species of bird in the family Tityridae. It has traditionally been placed in the manakin family, but evidence strongly suggest it is better placed in Tityridae, where now placed by SACC.

The Varzea Schiffornis is almost entirely cinnamon, but is paler below and on the rump. A feature not correlated to age, sex or subspecies is the individual variation in the amount of gray on the face. Though usually restricted to the ocular region, gray can also be present on the head sides and the crown, or even extend over the entire head and throat. This species is principally restricted to northern and western Amazonia, but it reaches as far south as Bolivia, and is exclusively a lowland bird, being rarely found above 300 m. As its name suggests, the species favours densely wooded creeks and stream banks, including on river islands, and swampy, low-lying forest that is regularly (or seasonally) inundated. This schiffornis is rarely found far from water, but it is sometimes also recorded in bamboo. Formerly known, rather inappropriately, as the Greater Manakin, the name Varzea Mourner much better reflects both its habitat preferences and its relationships. This species was formerly placed in the monotypic genus Massornis.

It is found in most western regions of the Amazon Basin, and Amazonian Bolivia, Brazil, Colombia, Ecuador, Peru; also regions of Venezuela. It mainly occurs in várzea.

SE Colombia, E Ecuador and W and C Amazonian Brazil (E to mouth of R Tapajós), South to East of Peru and North of Bolivia.

Not well known; apparently similar to that of S. turdina.

Not globally threatened. Uncommon to fairly common, but local throughout range. Poorly known species, heard much more often than seen.

Song a leisurely series of loud slurred whistled notes, with pauses of 2–3 seconds towards end; “chrrrrrrt” rattle in excitement.