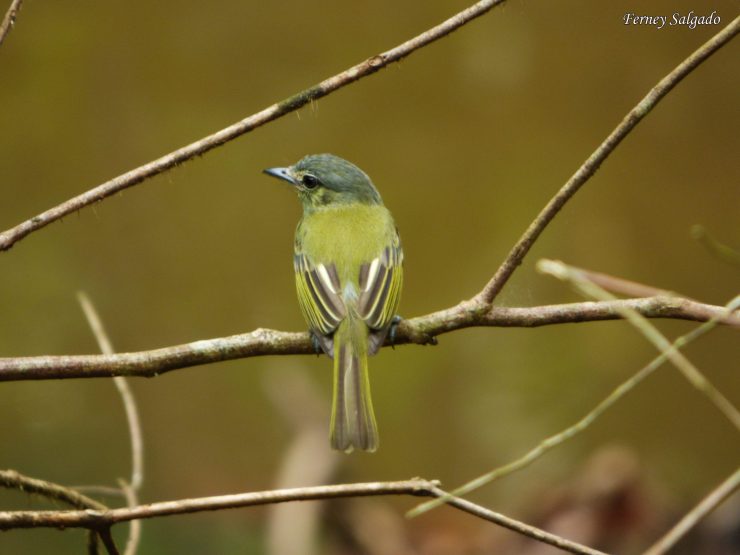 The Antioquia bristle tyrant (Pogonotriccus lanyoni) is a species of passerine bird in the family Tyrannidae. It is endemic to Colombia. This species is sometimes placed in the genus Phylloscartes.

Its natural habitat is subtropical or tropical moist lowland forests. It is threatened by habitat loss.

It measures an average of 11 cm in length. It has a grayish-green or bluish crown and nape, a yellowish face with spots on the beak and whitish lower middle eyelid ring. Its back is grayish olive; wings with darker brown and yellow edges. Its neck, chest and belly are bright yellow.

It forages for food in a group, feeding on insects found on the underside of leaves and branches. It flies from one branch to another, remaining perched for several minutes, repeatedly vocalizing short, high-pitched sounds.5 Nests in bushes near streams.

It is threatened by the loss of its natural habitat.

Red Book of the Birds of Colombia Vol. II

The Tiranuelo Antioqueño is endemic to Colombia, with a distribution restricted to the middle Magdalena valley (Caldas, Antioquia and Cundinamarca) between 450 and 1090 m (Cuervo y Toro 2001; Gómez and Amaya-Espinel 2002; Fitzpatrick 2004).

It is found in premontane rain forests, deciduous piedmont forests, very humid pre-montane forests, and secondary forests (Cuervo and Toro 2001; Gómez and Amaya-Espinel 2002). In the Victoria region (Caldas), it is recorded in remnants of secondary forest with the stratum below five meters (O. Cortés-Herrera pers. Obs. 2010).

Its main source of food is insects, which it captures on the fly or looking for them among lichens, leaves, branches or inflorescences (Stiles et al. 1999). Sometimes it joins mixed flocks (Cuervo y Toro 2001; O. Cortés-Herrera obs. Pers.).

In the Bellavista reserve (Victoria-Caldas) it is threatened by colonization, infrastructure projects, as well as by the deterioration and loss of the forest.

It is located in the Bellavista reserve, in the municipality of La Victoria (Caldas), of 22 ha that has community support (Valenzuela-Pérez et al. 1999) and in the Río Claro nature reserve (Antioquia), a private initiative that is started in 1970 to support the protection of tropical humid forests in the Claro river canyon. The majority of P. lanyoni records have been concentrated in these two locations.

Status of the species

This species has lost 61% of its habitat historically and in ten years it has lost 9.3%. The three regions in which the species is found have a strong pressure to destroy forests by deforestation for livestock, illicit crops and gold mining. Many of these impacts are not detectable at the scale of analysis of this study, so it is estimated that the real loss of habitat for the species is substantially greater than 9.3% in the past and combining the past and the future.