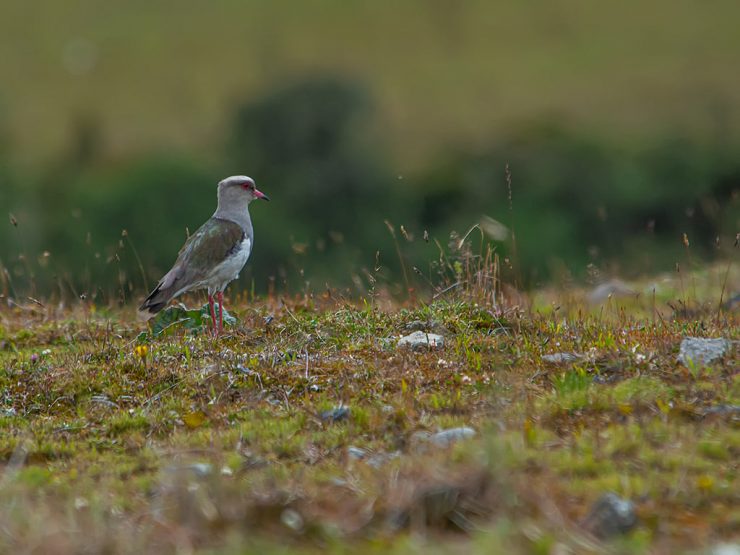 It measures around 33cm and weighs 193-230g. Both sexes are similar. It has legs, and red eyes and a red beak with a black tip. It has a cream-gray head, neck and chest and a dark brownish-gray eye patch. Its upper parts are bronze green with a purple patch on the wing coverts. Its chest is dark gray with gray terminal lines in the shape of a spur and the rest of the underparts are white. In flight it shows wide, rounded black wings as well as the distal half of the tail. It also has a large white wing patch and tail base. Juveniles are similar to adults, but with brownish head and neck, and buff-speckled chest.

Similar to the Common Pellar (Vanellus chilensis) but the latter has a black crest and face and chest.

It inhabits open area grasslands, coastal grasslands, reed beds, and swampy lands in the moorland. It is generally found near lakes or rivers and in partially flooded areas.

It feeds mainly on earthworms, beetle larvae, and grasshoppers.

In Colombia, no reproductive events have been recorded. In the rest of its range, eggs have been recorded between October and December. It nests in depressions in the ground lined with dry grass, sometimes near rocks where the chicks are sheltered. The size of its position is four olive brown eggs with small dark brown dots. They use the same nesting grounds year after year.

It can be observed alone, in pairs or in loose groups. It is a fairly territorial bird that forms stable pairs and defends its territory with low flights and strong vocalizations in the presence of intruders.