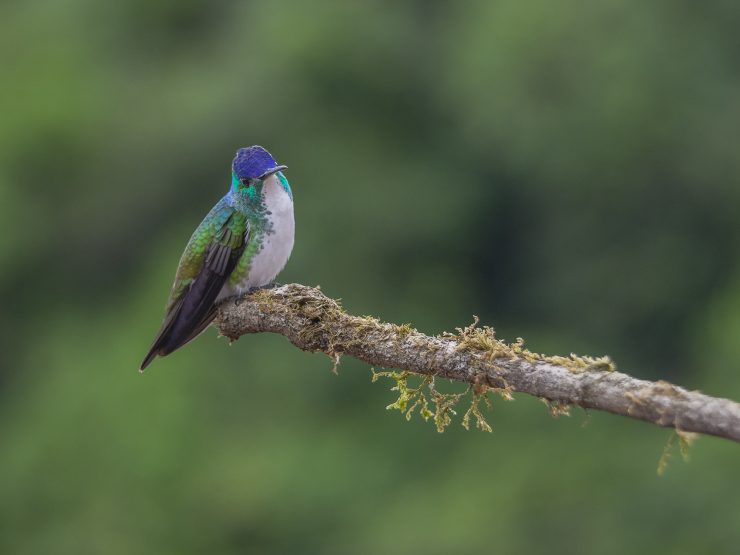 It is the only hummingbird in the highlands with completely white underparts. Her name Amazilia was established in honor of Amazili, who was an Inca heroine in Jeam Marmontel’s novel Les Incas, ou la destruction de l’Empire du Pérou. His French epithet was established in honor of Francia Bourcier, the daughter of the naturalist Jules Bourcier, an expert in hummingbirds.

Small bird, 4.7 g in weight and 9.1 cm in total length. Its beak is straight with a pink lower jaw. The male is bright green on the back, with an iridescent violet blue crown and iridescent green sides of the head and neck. The underparts are totally white with green flanks. The upper caudal feathers are coppery and the tail is slightly forked and bronze green. The female is similar, but with a green crown.

The only highland hummingbird with completely white underparts. It can be confused with females of other hummingbirds that are lower, but normally these have stippling on the throat or chest. The coppery coloration of the rump is also very distinctive.

It is distributed from 600 to 2100 m above sea level, but is more common between 1000 and 2000 m. This species is found in the three mountain ranges of the Colombian Andes and in western Ecuador and northern Peru.

It inhabits the edges of humid forest and secondary forest from the understory to the sub-canopy. Occasionally it can also be seen in crops and in deforested areas with some scattered trees.

The nectar of the flowers is its main food, although it also hunts insects on the fly from exposed perches.

It is a generally solitary hummingbird that follows foraging routes visiting scattered flowers at different heights above ground level. It also forms groups of individuals in the vicinity of flowering trees on whose flowers it periodically forages. Its song is a series of loud screeches that it sometimes uses to defend its feeding territory from the presence of other males of the same species.

This hummingbird is also known as the «Long-billed Diamond».