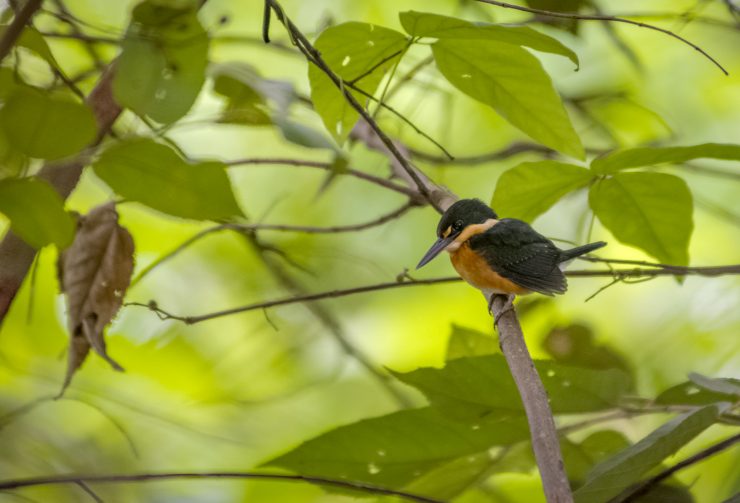 The American pygmy kingfisher (Chloroceryle aenea) is a resident breeding kingfisher which occurs in the American tropics from southern Mexico south through Central America to western Ecuador, and then around the northern Andes cordillera in the east to central Bolivia and central Brazil. The species occupies the entire Amazon basin and the Tocantins River drainage adjacent in Pará state Brazil. It also occurs on Trinidad.

The first formal description of the American pygmy kingfisher was by the German zoologist Peter Simon Pallas in 1764 under the binomial name Alcedo aenea.[2][3] The specific name aenea is from the Latin aeneus meaning «of a bronze colour». The current genus Chloroceryle was erected by Johann Jakob Kaup in 1848.

A molecular phylogenetic study published in 2006 found that the American pygmy kingfisher was a sister species to a clade containing the green-and-rufous kingfisher (C. inda) and the green kingfisher (C. americana).

The American pygmy kingfisher is 13 cm (5.1 in) long and weighs 10–16 g (0.35–0.56 oz). It has the typical kingfisher shape, with a short tail and long bill. It is oily green above, with a yellow-orange collar around the neck, rufous underparts and a white belly. The female has a narrow green breast band. Young birds resemble the adults, but have paler rufous underparts, no breast band, and speckled wings and flanks. The nominate southern C. a. aenea has two lines of white spots on the wings, while the northern C. a. stictoptera has three or four lines of spots and a concealed white patch of feathers on the undertail. The two forms intergrade in central Costa Rica.

This tiny kingfisher occurs in dense forests and mangrove swamps along small streams or rivers with heavily vegetated banks. The unlined nest is in a horizontal tunnel up to 40 cm (16 in) long made in a river bank, earth heap, or occasionally an arboreal termite nest. The female lays three, sometimes four, white eggs.

From March to April (likely until June).

The nest of this species is a 30cm burrow. deep, in walls of creek earth or in a mass of clay that remains when the trees fall, close to the water or not. They lay three to four eggs.

American pygmy kingfishers perch quietly on a low branch close to water before plunging in head first after small fish or tadpoles. They will also hawk for insects. They are not shy, but easily overlooked as they sit silently amongst riverside branches.