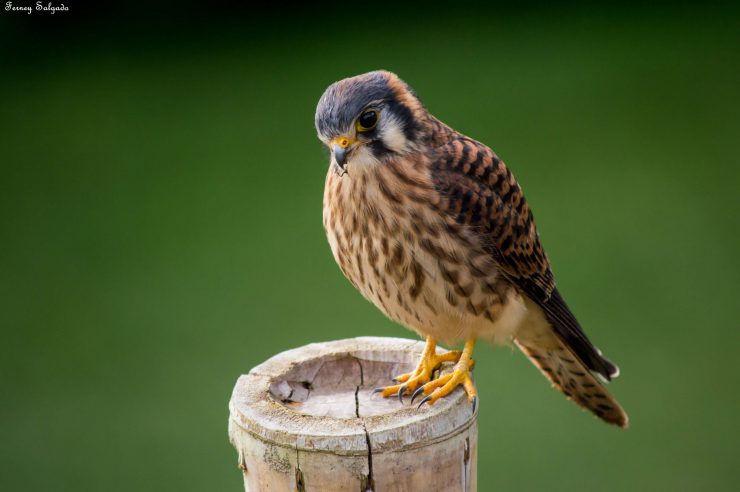 The American kestrel (Falco sparverius) is the smallest and most common falcon in North America. It has about a two to one range in size over subspecies and sex, varying in size from about the weight of a blue jay to a mourning dove. It also ranges to South America, and is a well-established species that has evolved seventeen subspecies adapted to different environments and habitats throughout the Americas. It exhibits sexual dimorphism in size (females being moderately larger) and plumage, although both sexes have a rufous back with noticeable barring. Its plumage is colorful and attractive, and juveniles are similar in plumage to adults.

The American kestrel usually hunts in energy conserving fashion by perching and scanning the ground for prey to ambush, though it also hunts from the air. It sometimes hovers in the air with rapid wing beats while homing in on prey. Its diet typically consists of grasshoppers and other insects, lizards, mice, and small birds (e.g. sparrows). This broad diet has contributed to its wide success as a species. It nests in cavities in trees, cliffs, buildings, and other structures. The female lays three to seven eggs, which both sexes help to incubate.

Its breeding range extends from central and western Alaska across northern Canada to Nova Scotia, and south throughout North America, into central Mexico and the Caribbean. It is a local breeder in Central America and is widely distributed throughout South America. Most birds breeding in Canada and the northern United States migrate south in the winter. It is an occasional vagrant to western Europe.

Based on appearance and behavior it was for many years considered a member of the primarily European and African kestrel clade within the genus falco, but recent DNA analysis shows the American kestrel to actually be genetically more closely related to the larger American falcons such as the Aplomado falcon, the Peregrine falcon, and Prairie falcon. Though the species has not been renamed as a result of these genetic analyses, it is not actually a kestrel in the phylogenetic sense. Instead, a process of convergent evolution to fit a similar small prey niche in the ecosystem as the true kestrels has left it with similar physical characteristics and hunting methods.

Physically, American kestrels are leaner and less muscular than larger falcons. The pectoral flight muscles of the American kestrel make up only about 12% of its body weight, as compared to about 20% for the strongest flying falcons such as the peregrine. The wings are moderately long, fairly narrow, and taper to a point. Their less muscular body type is adapted to energy conserving ambush hunting, rather than spending large amounts of energy consuming time on the wing and getting into long tail-chases of bird prey. For their size, they have strong talons and beaks, and can swiftly dispatch prey. Their lean build and energy conserving strategy allows a lower daily food intake than if they were more strongly muscled, yet with enough strength to commonly take bird prey as large as themselves, and occasionally larger. The success of this body style and hunting strategy is reflected in the high success of the species in densely populating a large range throughout the Americas. The flight of the American kestrel is not so dramatic and swift as more muscular falcons such as Merlins and peregrines, but their efficient adaptation to a broader diet of more available smaller prey, and need for less food per day, has resulted in there being many more of them.

In contrast to many other raptor species, the sexes differ more in plumage than in size. Males have blue-grey wings with black spots and white undersides with black barring. The back is rufous, with barring on the lower half. The belly and flanks are white with black spotting. The tail is also rufous, with a white or rufous tip and a black subterminal band. The back and wings of the female American kestrel are rufous with dark brown barring. The undersides of the females are creamy to buff with heavy brown streaking. The tail is noticeably different from the male’s, being rufous in color with numerous narrow dark black bars. Juveniles exhibit coloration patterns similar to the adults’. In both sexes, the head is white with a bluish-grey top. There are also two narrow, vertical black facial markings on each side of the head, while other falcons have one. Two black spots (ocelli) can be found on each side of the white or orangish nape. The function of these spots is debated, but the most commonly accepted theory is that they act as «false eyes», and help to protect the bird from potential attackers.

It feeds on insects, rodents, other birds, amphibians, and small reptiles that it usually hunts by flying from a natural or artificial vantage point. Occasionally it uses the technique of attacking its prey from a static position that it keeps flying (Hover; Origin of its common name in Spanish)

Like the other representatives of the genus Falco, it does not build its own nest. It deposits its eggs in tree cavities or abandoned nests of other species of birds, frequently using cavities created by woodpeckers, both in trees and in termite mounds. Also use artificial nest boxes if they are available in your territory.

The female lays one to five speckled eggs in the nest, the male provides food and continues to do so when the chicks are born, when the chicks increase in size the female also hunts and provides prey to the nest.

Until the sixth edition of the AOU Checklist of North American Birds was published by the American Ornithologists’ Union in 1983, the most commonly used name for the American kestrel was the sparrow hawk or sparrowhawk. This was due to a mistaken connection with the Eurasian sparrowhawk in the genusAccipiter. The sixth edition of the AOU Checklist corrected this, officially renaming the bird American kestrel. Several other colloquial names for the kestrel are also in use, including grasshopper hawk, due to its diet, and killy hawk, due to its distinct call.

As noted in the introduction, DNA analysis shows the American kestrel to actually be genetically more closely related to the larger American falcons than to the true kestrels. However, based on its physical similarity to the kestrels and the established nature of the name American kestrel, there has been little impetus to change its name. This could change in the future if continued genetic research more precisely determines the evolutionary history of the American kestrel within the genus falco. The entire genus is actually a set of species so closely related that most or all can be hybridized by artificial insemination. Significant natural hybridization of species has occurred in the past during the evolution of this closely related set of species, such that precise evolutionary genetic analysis as to which species are more basal to other species or to the genus as a whole is difficult to render.

The American kestrel’s scientific name, Falco sparverius, was given by Carl Linnaeus in his 18th century work Systema Naturae. The genus refers to the falcate, or hooked, shape of the beak, and the specific name means «pertaining to a sparrow», referring to the bird’s small size and hunting of sparrows as a typical prey.

Seventeen subspecies of the American kestrel are recognized, generally based upon plumage, size, and vocalizations:

F. s. sparverius, described by Linnaeus in 1758, is the nominate subspecies. It is found in most of the United States, Canada, and Mexico.

F. s. paulus, described by Howe and King in 1902, is found in the Southeast United States, from Louisiana to Florida.

F. s. peninsularis, described by Mearns in 1892, is found in southern Baja California.

F. s. tropicalis, described by Griscom in 1930, is found from southern Mexico to northern Honduras.

F. s. nicaraguensis, described by Howell in 1965, is found in Honduras and Nicaragua.

F. s. sparveroides, described by Vigors in 1827, is found in Cuba and the Isle of Youth, and southern to central Bahamas.

F. s. dominicensis, described by Gmelin in 1788, is found in Hispaniola and Jamaica.

F. s. caribaearum, described by Gmelin in 1788, is found in Puerto Rico through the Lesser Antilles to Grenada.

F. s. brevipennis, described by Berlepsch in 1892, is found in the Netherlands Antilles.

F. s. isabellinus, described by Swainson in 1837, is found from Venezuela to northern Brazil.

F. s. ochraceus, described by Cory in 1915, is found in eastern Colombia and northwest Venezuela.

F. s. caucae, described by Chapman in 1915, is found in western Colombia.

F. s. aequatorialis, described by Mearns in 1892, is found in northern Ecuador.

F. s. peruvianus, described by Cory in 1915, is found in southwest Ecuador, Peru, and northern Chile.

F. s. fernandensis, described by Chapman in 1915, is found on the Juan Fernández Islands off Chile.

F. s. cinnamominu, described by Swainson in 1837, is found in Peru, Chile, and Argentina.

F. s. cearae, described by Cory in 1915, is found from northeast Brazil south to eastern Bolivia.

The American kestrel has three basic vocalizations – the «klee» or «killy», the «whine», and the «chitter.»The «klee» is usually delivered as a rapid series – klee, klee, klee, klee when the kestrel is upset or excited. This call is used in a wide variety of situations and is heard from both sexes, but the larger females typically have lower-pitched voices than the males. The «whine» call is primarily associated with feeding, but is also uttered during copulation. The «chitter» is used in activities that involve interaction between male and female birds, including courtship feeding, copulation, and the feeding of nestlings.Nestlings can produce calls similar to those of adults at 16 days old.