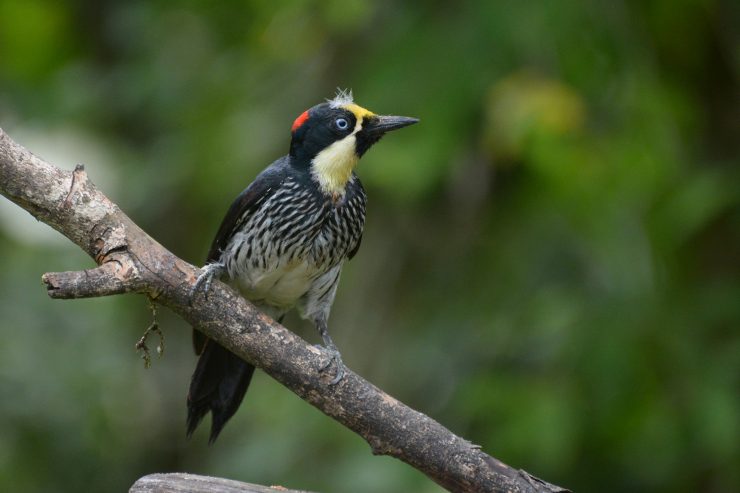 This species is a very noisy and gregarious bird typical of the Andes that is strongly associated with oak forests (Quercus). Its name Melenerpes means black woodpecker and derives from the Greek roots melas = black and herpes = climber. The epithet formicivorus means that it eats ants and derives from the Latin roots formica = ant and vorus = that eats or devours.

It measures about 23 cm and weighs 65 to 90 g. It has a moderately long and pointed black beak. The iris of their eyes is white, they have gray, brown or grayish orbital skin and gray to greenish-gray legs. The male has a yellowish-white forehead and loreal region that extends to the flanges and down to the throat. It has a red occiput and a black patch around the beak. The sides of the neck and the rest of the upper parts are black with a rump and white wing patch. Their underparts are mainly white with a black chest and sides streaked with white. The female is similar to the male but without red on the occiput and with the bill slightly shorter. Juveniles are more brownish, with suede-stained underparts and less noticeable chest markings.

Unmistakable due to black and white facial pattern.

This species is found in the United States in northwestern Oregon, northern Baja California, Arizona, New Mexico, and Texas. Also in southeast Mexico, northeast Guatemala, Belize, northern Nicaragua, western Panama, and Colombia. In Colombia it is found from 1400 to 3300 m above sea level on both slopes of the Western and Central mountain ranges up to the headwaters of the Cauca and Magdalena rivers. Also on the western slope of the Eastern Cordillera from Norte de Santander to the south.

This bird is strongly associated with oak forests (Quercus). It is also found in humid forests where it uses forest edges, open areas with scattered trees, gardens, and shady coffee crops.

It feeds on oak sap (Quercus) which constitutes a fundamental part of its diet. It also ingests berry-type fruits, catkins of Cecropia ssp., Oak acorns (Quercus), and nectar from large-flowered species such as Spirotheca sp. and Ochroma lagopus, both species of the Bombacaceae family. It also includes a significant portion of arthropods such as ants, wasps, beetles, mosquitoes, and butterflies in its diet. Sometimes it also feeds on the eggs of other birds and small lizards.

In Colombia, individuals in reproductive condition have been registered in the month of May and June in the Central and Western mountain ranges and in the month of March in the department of Nariño. Also young and adults in reproductive condition in September in Popayán. They can be monogamous, polyandrous, or polygynous and form cooperative breeding groups. It nests in a cavity excavated by all members of the group in dead tree trunks at heights ranging from 2.5 to 21 m. Their lay size is 4 to 6 eggs, which all members of the group incubate for 11 to 12 days. In this task the individuals are relieved every 1 to 25 minutes leaving the nest alone very few times. During brooding they warm the young in sessions of about 20 minutes while the other members of the group bring food to the nest. The young acquire all the plumage necessary to fly from day 30 to 32 after hatching and continue to be fed by members of the group for several more weeks. After this period of time, the young remain in the paternal group waiting to get into a reproductive position.

It is a fairly noisy and conspicuous bird that stays in pairs or family groups of up to 12 individuals. It obtains its food by piercing the wood, searching between the crevices of the trunks, between epiphytes and the foliage or capturing insects in flight. They commonly congregate near bedrooms before going to sleep and make large amounts of insect captures, some of which are saved and retrieved the next day. In North America they are known to store acorns in early fall to stock up on during winter shortages. In Colombia it can also store mainly insects and fruits during periods of abundant supply. It is a fairly territorial species that defends its centers of activity, like sap trees, in the presence of an intruder.

Sometimes it has been proposed to classify Baja California populations under the martirensis breed, but these are indistinguishable from the bairdi subspecies.

It is considered a species of minor concern.